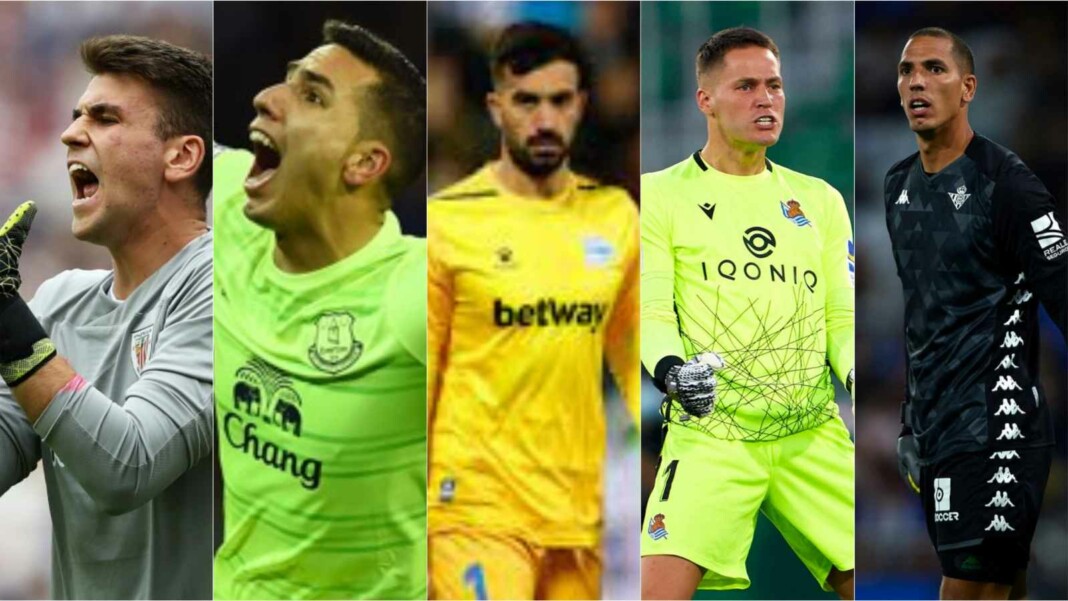 Goalkeeping has always been an underrated position in football. While attackers get most of the fame for scoring goals and winning titles, Goalkeepers are often overlooked or overshadowed by strikers and other players. Spain Boasts of having some of the best Goalkeepers in La Liga and other tournaments around the world. Spain has been a powerhouse in Football and has formed a great list of players and iconic figures who have played in many international stages. Spain has some of the best players in the world including Goalkeepers, the Spanish have produced many quality players and prominent personalities in football. We have compiled a list of the 5 best current Spanish goalkeepers in La Liga.

Here is a list of the current 5 Best Current Spanish Goalkeepers in La Liga.

The 23-year-old Spanish goalkeeper has been a strong pillar from the back for his team. Athletic Bilbao has been in great form due to their strong defence and Unai Simon. Simon was bought on loan in Elche and has been instrumental for Gaizka Garitano’s side this season. In the 2019/20 season, Unai Simon proved himself as one of the best goalkeepers in La Liga and earned his spot in the Spanish national team. This season he has been remarkable with great saves at crucial moments.

Alex Remiro joined Real Sociedad from rivals Athletic Bilbao back in 2019 on a free transfer and has performed consistently throughout the years. The 25-year-old has been the main goalkeeper for Real Sociedad in the league this season, and his quick reflexes and saves have played a vital role for his team. Remiro has performed brilliantly this season, the Spanish keeper has kept an impressive 8 clean sheets in 18 games and continues to be one of the 5 Best Current Spanish Goalkeepers in La Liga

Sergio Asenjo joined Atletico Madrid on a four-year contract on July 8, 2009, for €5 million. He started the season well, but would eventually lose his first choice to David de Gea, The young keeper was expected for greatness among Athletico fans. He instantly had several impressive games and was called to play for Spain’s national team. Asenjo had great potential, but his proneness to injury has played a negative role in his career. Currently, Sergio plays for Villarreal and has played 37 matches this season with 11 clean sheets.

Robles started his football career at Atlético Madrid in 2008 and progressing into the B team a year later, before being promoted into the senior squad. He moved on loan to Vallecano in January 2012, and again a year later to Premier League side Wigan Athletic, where he was part of their 2013 FA Cup Final-winning squad before joining Everton. Robles had a five-year contract with Everton, where he has a good run and played an important role for his team. Robles was the first choice keeper for Everton as he performed consistently and made some crucial saves. The Spanish keeper currently plays at Real Betis and has 7 cleans this season.

Pacheco currently plays for Deportivo Alavés, he made his football debut back in 2011, where he joined Real Madrid as a member of the C- team squad. He slowly made his way into the main squad in 2011 and played the Copa Del Ray. Fernando was part of the Real Madrid squad as a backup keeper and was occasionally let to play in major tournaments. He was part of the Fifa Club world cup winning squad for Madrid back in 2014. In 2015, Pacheco signed a three-year deal with Depotivo Alves and joined as their keeper. Pacheco was the main keeper throughout the season Since 2015 Fernando has made 201 match appearances for his team. He has been a young keeper with brilliant skill and fast reflexes.