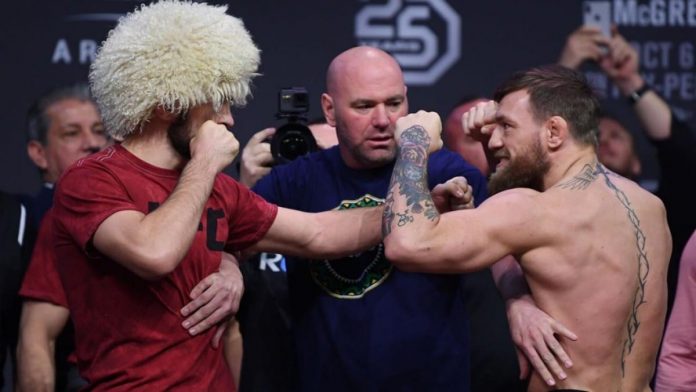 The rivalry between Khabib Nurmagomedov and Conor McGregor is one of the biggest rivalries in UFC and it is one of the fans’ favorite. After Khabib announced his retirement Conor came back to relinquish the Lightweight title.

‘The Notorious’ made his comeback against Dustin Poirier at UFC 257. In the rematch ‘The Diamond’ took revenge for his first loss and knocked out Conor in the second round of the match. This was Conor’s first TKO loss in UFC.

Conor promised to bounce back even stronger and hold the title in his hands once again but his arch-rival Khabib Nurmagomedov doesn’t think Conor will be in his prime now. Talking to fellow Russian fighter Magomed Ismailov, Khabib says,

“Never, Conor McGregor would never come back stronger from his last defeat. A person never has two peaks. Never… I’m not speaking about him now, I’m speaking in general, no one has two primes,”

“A team can have different peaks, Real Madrid, for example… players change. But we’re talking about us, one man, a boxer, an MMA fighter, will never have two peaks.”

UFC President Dana White tried his best to bring Khabib Nurmagomedov for one last match and he wants this match to happen with Conor McGregor. but the ‘Eagle’ isn’t interested at all.

Whether Conor McGregor hit his prime or grab the UFC Lightweight championship in his hands, Khabib doesn’t seem to come back. So what you’ll thinks Conor will hit his prime again or not?

Also Read: “If Brock Lesnar wants it, he can get the smoke, that’s all I’m saying,” Tom Aspinall calls out Brock Lesnar.