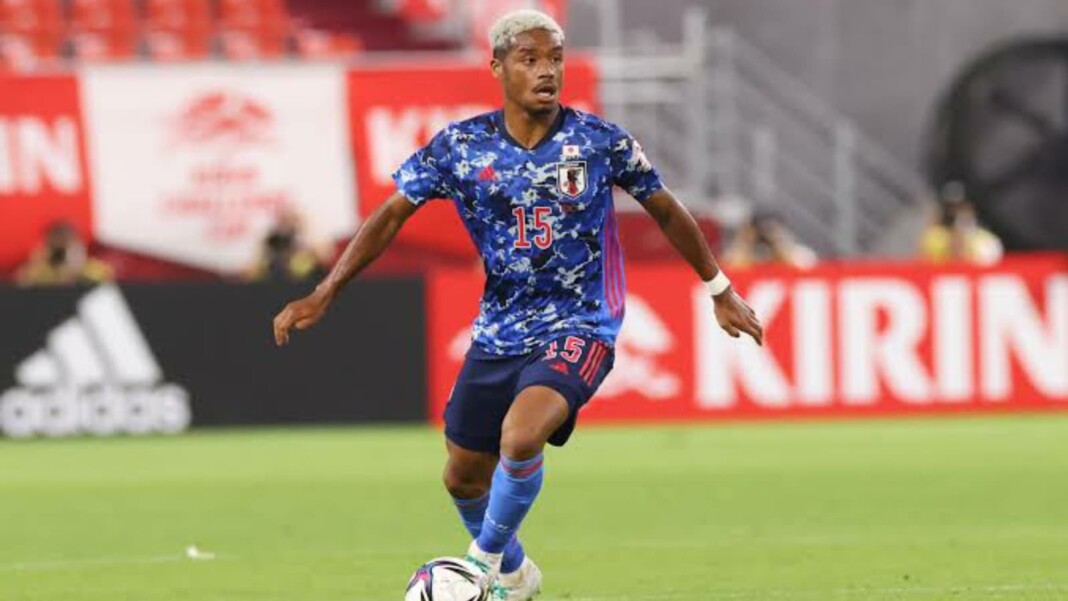 Yokohama forward Ado Onaiwu recently made headlines as Japan thrashed Kyrgyzstan 5-1 in the Asian Cup qualifiers, bagging a hattrick for himself. There were just six minutes between his first goal and his third as Onaiwu made his full international debut after earning his first international appearance a week back.

The manager’s decision to start Onaiwu paid rich dividends as the forward scored a penalty, a poacher’s finish and a header, all in a span of six minutes. Japan qualified for the Asia Cup after dominating the group stage with eight wins out of eight and a goal difference of +44.

Onaiwu made his professional debut for second-tier side JEF United Chiba in 2014, who signed him after an impressive showing with the J. League U22 Selection squad. He scored against Kashiwa Reysol in his debut for the club and also scored his penalty in the shootout as United Chiba ran out 12-11 winners.

After spending two more seasons at the Fukuda Denshi Arena, he moved to Japanese heavyweights Urawa Red Diamonds. However, he was sent out on loan in both season he spent there, first to Renofa Yamaguchi and then to Oita Trinita. At Renofa, he enjoyed the most prolific season of his career yet, scoring 22 times and assisting 5 goals in 44 matches.

After two spending two seasons on loan, he earned a permanent transfer to top tier side Yokohama F. Marinos in 2020. In his one and a half years with the club, he has 21 goals and 7 assists in 56 games. Currently, he is heavily linked with a move to Scottish heavyweights Celtic.

Celtic had a disappointing 2020/21 season that saw them finish 25 points behind rivals Rangers, and bottom of their Europa League group. In an attempt to shake things up, they signed manager Ange Postecoglou from Yokohama F. Marinos earlier this summer to take over from caretaker manager John Kennedy. It is speculated that Onaiwu could be one of the additions that Ange desires to have at the club, considering that he was Ange’s primary hitman in his time at Yokohama.

Adding further fuel to the rumours, Ado thanked Postecoglou in a post-match interview after his international debut against Serbia. “I always knew if I kept playing well and scoring goals for Yokohama, I would get a chance with my national team,” he said. “And I owe this to my manager Ange Postecoglou who has left the club this week. I have enjoyed an excellent relationship with him and he has been a huge influence in my career.”

“I don’t mind admitting that when he first came to the club, I was confused with his training because it was of such high intensity. But because of that, he improved my game immeasurably and you can see I got my rewards by playing against Serbia.”

“I was able to speak to Mr Postecoglou before the match against Serbia. I thanked him for all his help and for helping me grow as a player. I will always be grateful for his guidance in my career.”

Celtic stand at a risk of losing both of their top scorers of last season, with Odsonne Edouard linked with a number of English clubs and Mohamed Elyounoussi’s loan deal yet to be extended past this summer. Signing a prolific scorer to replace one, or both, of these players is high on manager Ange’s list; and Onaiwu is likely to follow his coach’s footsteps to the Scottish Premiership.