In what many can consider one of the greatest featherweight fights in UFC history, “The Great” Alexander Volkanovski and “T-City” Brian Ortega are giving their heart to the battle for ages at UFC 266. Amongst a series of brutal stand up exchanges, there was something unbelievable that showed why Alexander Volkonovski is the UFC featherweight champion and without a doubt one of the pound for pound best. Preceded by a huge knockdown delivered by Ortega, “T-City” jumped for a successful guillotine choke over “The Great” and held a tight hand around his neck.

The condition was so critical that spectators can literally view the desperation of escape with Volkonovski’s rapidly shaking legs and the fact that the choke was held for so long made it much worse. Luckily, Volkonovski has trained submission escapes with BJJ legend Craig Jones and thus, Volkonovski came out victorious in that little battle as he successfully escaped Ortega’s vicious choke that has credited “T-City” with many submission victories.

The second escape was followed by another temporarily shorter guillotine choke followed by an escape from a triangle choke and then finally it was a potential darce choke which made in a total of 4 submission attempts from Ortega and respective escapes from Volkonovski. At last, the whole fight has been taken as a unanimous victory by “The Great” and now it adds a feather on a cap to his will as a fighter that he could surpass his opponent’s most powerful parts of the arsenal.

This is the second consecutive title defense for the Aussie and therefore Volkanovski demands nothing but respect as written all over in his post-fight interview. “The Great” is on a 20 fight winning streak with 10 straight wins coming in from UFC. From here on, he has two clear pathways as either a trilogy with Max Holloway considering he had very close fights with the preceding UFC featherweight champion or another entertaining fight with Ortega. Speaking of the potential contenders, Giga Chikadze is on a run over the UFC featherweights and can enter the title picture anytime soon 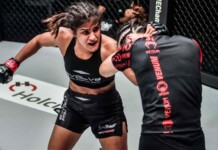