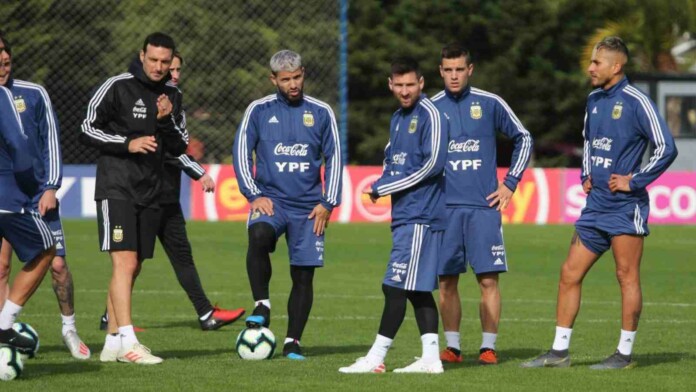 Argentina head coach Lionel Scaloni has finally announced his Squad for the upcoming Copa America, scheduled to start from 13th June. There were four players who failed to make the cut from the squad that played their World Cup qualifiers against Chile and Colombia in the past two weeks.

The big surprise was the omission of Sevilla winger Lucas Ocampos who was a starter for the Argentine coach in most of their recent encounters. The other three players to miss out were Juan Foyth, Emi Buendia, and Jose Palomino. Many even expected Emi Buendia to travel to the Copa as he has been brilliant for Norwich last season which saw him picked up by Aston Villa for a club-record transfer fee of £35 million.

Lionel Scaloni have successfully built a good base for the upcoming generations with his work as a head coach. He has mostly relied on youngstars and also found a way to install some defensive stability in a team that looked clueless on several occasions during the 2018 FIFA World Cup. Starting from the back Emiliano Martinez, who has been sensational throughout the last campaign in the English Premier League is likely to have earned a deserved first-team spot. Argentina have schose to travel with four goalkeepers to the prestigious competition which is something few would have expected.

Argentina finally seem to have found two solid defenders namely, Cristian Romero and Lisandro Martinez at the heart of the defence, unlike Nicolas Otamendi who is error-prone. However, Otamendi makes the squad but is unlikely to be a starter under Scaloni. The core of the midfield remains the same with the likes of Rodrigo De Paul, Leandro Paredes, Giovani Lo Celso, and Nicolas Domingues all making the cut. Out of the four, De Paul has been particularly brilliant with Udinese and has drawn the attention of clubs like AC Milan who are looking ahead to a rebuilding project.

As far as the forward line is concerned, Argentina scores high on the quality meter. With the evergreen Lionel Messi leading the side and experienced top achievers like Sergio Aguero, Lautaro Martinez and Angel Di Maria, the quality is sure to be on display. Scaloni has also done a good job in finding some youth in the frontline who have been in fine form with their respective clubs. Bayer Levrkusen’s Lucas Alario and Lazio’s Joaquin Correa are two such players who would be looking to make an impact off the bench.

On the whole, this team is a good one to go with into such an important competition, even more for Argentina, who have not tasted international success since 1993. With a tactical gaffer like Scaloni, Argentina and Messi could finally be lifting the Copa America this time.

The final squad travelling feature in The Copa America