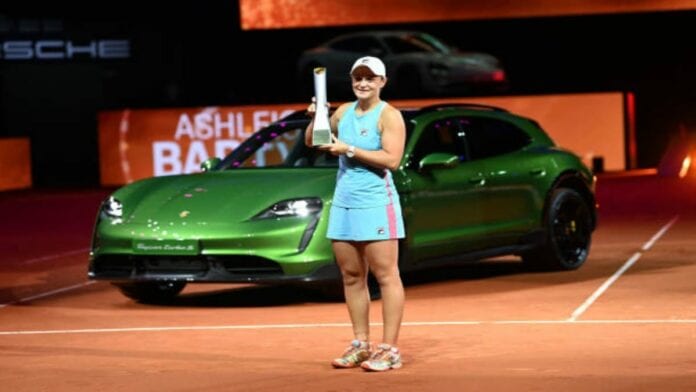 Top seed Ash Barty beat Aryna Sabalenka 3-6, 6-0, 6-3 on Sunday to win the Porsche Grand Prix at Stuttgart to win the third title of the season. After winning in Miami and a pre-Australian Open event in Melbourne on hard court, Barty added the Stuttgart title, her first tournament on clay this season and also her first title on the surface since the 2019 French Open.

The World No.1 looked completely off in the first set. She moved very slow and hit a lot of unforced errors. She lost the first set 3-6 but showed pulled off some amazing shots in the end.

The Aussie showed her class in the second set. She was on song from word go and completely dominated Sabalenka. She broke Belarussian’s serve thrice and bageled her. The third set was no different as Barty hit winners left, right and center to win the final set 6-3.

‘You’ll be back in no time’: Ash Barty to Aryna Sabalenka

It was the third straight come-from-behind win for Ash Barty, who celebrated her 25th birthday by playing three sets against Elina Svitolina in Saturday’s semifinals. Barty also won in three sets against Karolina Pliskova in the quarterfinals.

Sabalenka took a medical timeout before the third set. She emerged with a bandage around her right thigh but couldn’t prevent Barty from going on to claim her 11th career title.

“Get healthy, get well – you’ll be back in no time,” Barty wished Sabalenka at the end of the match. The 22-year-old said she hopes to be fit for the clay-court tournament in Madrid, which starts Thursday.

“I gave it my all even with the injury, but she played really well,” said Sabalenka, who first felt the hip adductor tighten at the end of the opening set. “I gave her the opportunity and she took it, she’s playing really well on clay, it suits her game.”