With the Tokyo Olympics a month away, the top athletes of India will be competing at the Indian Grand Prix 4 which is all set to kick off on Monday. The fourth Indian Grand Prix will be the final chance for big guns like Hima Das, Dutee Chand, Tejinderpal Singh Toor and Annu Rani to reserve their Olympic berth.

It will be a tough ask for the athletes given that they have not had the opportunity to feature in international competitions for quite some time now. Several Indian track and field athletes missed the meets in Kazakhstan and Kyrgyzstan because of travel restrictions. As a result, they will be under huge pressure to perform here in Patiala in order to nail their tickets to Tokyo.

Athletes to watch out for at the Indian Grand Prix 4

All eyes will be on the women’s 4x100m relay team, which will include Hima and Dutee at the Indian Grand Prix 4. They will fancy chances for a Tokyo Olympics berth by clocking less than 43.05 seconds in the one-day event. The relay team is currently ranked 22nd in the Road to Tokyo list and will have to break into the top-16 to qualify for the Olympics.

Dutee will be looking to breach the automatic qualification mark of 11.15 seconds in the individual women’s 100m race. She is comfortably placed at 43rd out of 56 competitors in the Olympics and is expected to make it any way with less than 10 days left for the qualification deadline. Dutee is currently in the 45th spot in the Road to Tokyo list and can qualify for the 200m with 56 athletes to run in the event.

When and where to watch Indian Grand Prix 4 live streaming?

Women’s javelin throw will be the opening event followed by men’s 400m hurdles and long jump. Following them will be the much-anticipated event of women’s 4x100m relay as all hoped rest on the shoulder of star sprinter Hima and Dutee. Women’s 200m will be the final event of the day and will feature Hima as she looks to book an Olympic spot in her second event. 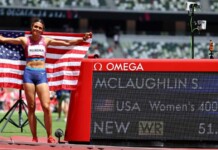 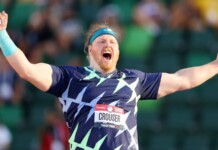 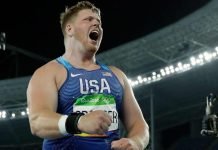 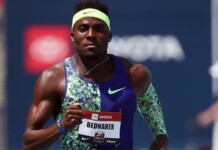