Allyson Felix has long been one of the leading sprinters of America and her impressive record over the years is testimony to that. She is the most decorated Olympian in Track and Field events having won a total of 11 Olympic medals which includes 6 Gold Medals.

Felix is also the most decorated athlete in the World Athletics Championship with a total of 18 career medals which include her 13 Gold Medals which is a record in itself. She also stood 1st on 4 occasions in the Diamond League and also won 2 Golds at the Youth Championships in 2001.

All these achievements have made her one of the most influential athletes in not only the US but also across the globe. She was also included in Time Magazine’s 100 most influential people of 2020. While she has been busy on the track winning the medals and creating records, she is also quite active on her Instagram handle giving a glimpse of her personal life.

Who is Kenneth Ferguson, husband of Allyson Felix?

Allyson is married to American sprinter and hurdler Kenneth Ferguson. Kenneth specialises in 400M running and also participates in the 110M and 400M hurdles. He has also been participating in the 4X400M relay events across her career. Kenneth was a Triple Gold Medallist at the 2003 Pan American Junior Championships winning the 110M, 400M hurdles and also the 4X400 relay.

The couple has a daughter Camryn born in 2018 and often share photos of their parenting time on their respective social handles. 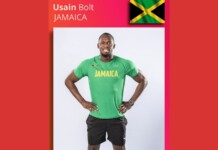