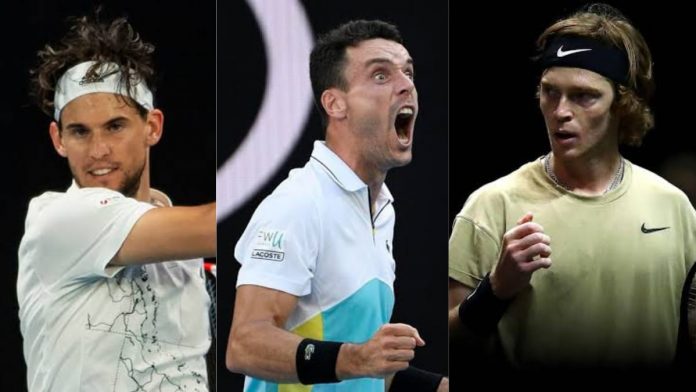 Dubai Open 2021, popularly also known as the Dubai Duty Free, is an ATP 500 event will take place in Dubai from March 14-20. This is the flagship tennis event in the MENA Region and has been the flag bearer of Tennis for many years now.

A few top stars are missing from this year’s event, which will give an opportunity for someone new to showcase his talent and win the coveted title. Top seed Dominic Thiem will lead the pack, followed closely by second seed Andrey Rublev. Third seed for this year is Denis Shapovalov. Fourth seed Roberto Bautista Agut is the dark horse for this tournament.

The top half of the draw features top seed Dominic Thiem, third seed Denis Shapovalov and fifth seed David Goffin. All the three have been given first round byes. Thiem should negotiate easily into the Quarter Finals. In the Quarters he will have his first real test in David Goffin. Goffin who has recently won the ATP 250 event in Montpellier is high on confidence.

But, Thiem has enough class and experience to override Goffin’s challenge in the first quarter Final. The other match to lookout for will be Shapovalov against the eighth seed Karen Khachanov, in the second Quarter Final. Shapovalov on his day is a world beater on hard courts, but if he slips up the Russian will surely take advantage.

The bottom half of the stars has a whole host of stars starting with the second seed Andrey Rublev, dark horse for this tournament fifth seed Roberto Bautista Agut, and seventh seed Stan Wawrinka. Rublev has a fourth round encounter with fifteenth seed, American Taylor Fritz that will be interesting but Rublev will get the better of him.

Another interesting matchup will be between Agut and Sinner in the fourth round. Agut has enough form and experience to overcome this challenge. In the end, Agut vs Wawrinka will decide who takes the place beside Rublev in the second semi final. It will be Agut based on his current form.

The first Semi Final will be  Dominic Thiem vs Denis Shapovalov, a match which Thiem will be favourite to win due to his superior head to head record of 3-0. The last time these two players met was in the Laver Cup in 2019 a contest which Thiem won in three sets, 6-4 5-7 13-11.

The second Semi Final will be an encounter between Roberto Bautista Agut and Andrey Rublev. These two players have met five times on the tour and Agut leads the head to head 3-2. The last meeting between the two was at the Qatar Open which Agut won 6-3 6-3. But Agut’s record will show that he lacks big match temperament, and expect Rublev to take full advantage of that.

They may be one and two in the seedings, but the kind of form Rublev is in he has to be the favourite especially on hard courts. Also, in their last meeting at the ATP Finals in 2020, Rublev had beaten Thiem 6-2 7-5.

To lift the Title: Andrey Rublev