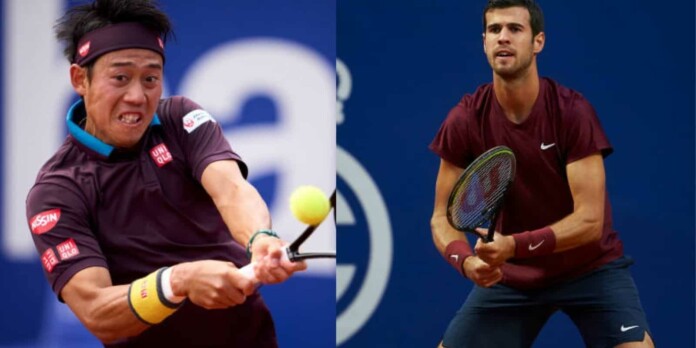 World No.23, Karen Khachanov will take on World No.41, Kei Nishikori in the opening round of the 2021 Madrid Open on May 3.

The 24-year-old has played three matches, out of which he has won only one against Laslo Djere in Monte Carlo. In Barcelona, he was downed by Brit, Cameron Norrie in three sets. The Russian hasn’t enjoyed a great year on the court thus far and it remains to be seen how he fares in the Spanish capital. Much of his play will depend on his serve and big booming ground strokes from the back court.

On the other hand, the 31-year-old comes into this tournament with some intense matches under his belt at the recently concluded Barcelona Open. Nishikori played two three-setters, before meeting the eventual champion, Rafael Nadal in the third round. After getting pummeled in the opening set, the Japanese respond in style by getting back to level terms. Although the Spaniard triumphed, Nishikori walked out with plenty of confidence. He loves the clay and is warmed up well for Madrid. Let’s not forget, Nishikori is also a former finalist in Madrid, where he lost to Nadal due to injury.

These two have met four times on the tour and currently, it is all squared at 2-2. Interestingly, their encounters have been on the grass and hard court, but never on clay. It was the Japanese who came out on top in their last meeting in Vienna in 2018.

Both players have got three matches under their belt this season on clay. While Nishikori did some damage at the Barcelona Open, Khachanov is yet to find his footing on the dirt. Moreover, the Japanese is a better mover on the clay, with a superior defense as well. If the Russian tries to engage in long rallies with his opponent, then it is likely that he will come out second best.

Gerard Crispin - May 14, 2021
Michael Chandler made a statement at UFC 257, after knocking out the seasoned Dan Hooker on his UFC debut. The Bellator Legend quickly burst...