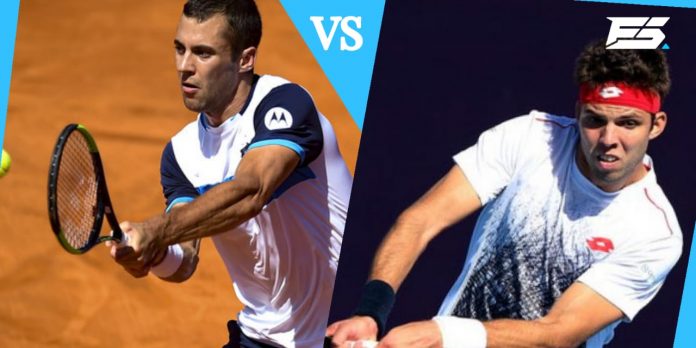 Jiri Vesely will be up against the Serbian Laslo Djere in the first round tie of the ATP Miami Open 2021, with the match scheduled on 24th March,2021. Vesely who is from the Czech Republic is currently ranked no. 71 in the men’s rankings whereas Djere occupies the 57th position.

The 27-year old Jiri Vesely has had a mediocre start to the year 2021, last featuring at the ATP 250 Montpellier where he lost in the R16 to a much lower-ranked player, Peter Gojowczyk. Vesely also played at the 2021 Australian Open but lost in the Round of 64. The Czech was a part of the Davis Cup-winning team of 2013 and also won the Gold Medal at the 2010 Singapore Youth Olympics in the Doubles category.

Laslo Djere, the 25-year-old from Serbia has a similar start like Vesely going out in the early rounds of the tournaments he has participated in. Djere last featured at the Acapulco Open, losing to Alexander Zverev in straight sets in their R16 match. Djere won his first ATP title at the 2019 Rio Open defeating Dominic Thiem in the first round.

This ATP Miami Open 2021 encounter will be the second meeting between the two players. They had previously fought at the ATP 250 Sardinia in the quarter-finals where Djere won in straight sets, as he leads the head to head 1-0.

Laslo Djere won the last time these two faced each other, however, the surface was clay and this time around, it will be played on a hard surface which suits the style of Jiri Vesely. Also, this will be his first appearance at the Miami Open and has not played on a hard surface since his first-round defeat to Rafael Nadal at the Australian Open 2021.

Prediction: Jiri Vesely to win the match in 3 sets.