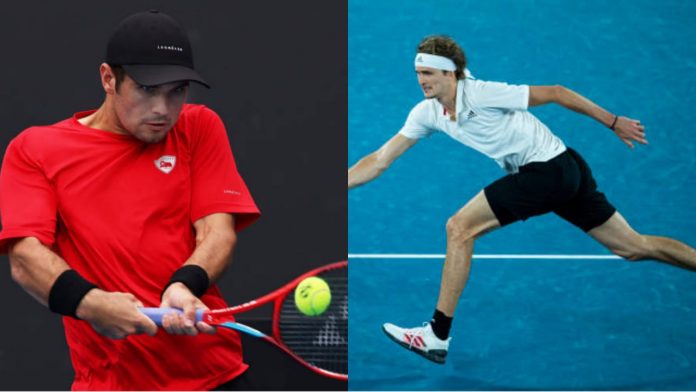 German Alexander Zverev and American Marcos Giron will clash against each other in the 1st round of the Australian Open 2021.

The 2020 Australian Open semi-finalist and US Open finalist, Alexander Zverev will be looking to win his maiden grand slam title this season, and if the ATP Cup is anything to go by, he looks in good touch surely.

Ranked No.7, the German will start his run at the Australian Open after he played his last match in the ATP Cup where he lost 3-6 6-3 7-5 to Medvedev in the semifinal on the 6th of February. He defeated Shapovalov at the ATP Cup and lost to Djokovic in three tight sets.

27-year-old American Marcos Giron has been on the tour for a few years now. But despite his success on the Challenger Tour, he is yet to convert it to the ATP main draw.

He registered his first-ever win against a top ten player; Matteo Berrettini at the Paris Masters last November. Ranked No.73, Giron will start his run at the Melbourne after he played his last match at the Murray River Open where he lost 6-4 7-6(4) to eventual champion Evans in the 3rd round.

The two players haven’t met yet on tour. This will be their first meeting. The H2H stands at 0-0. A fierce receiving game from Giron may result in an interesting encounter.

The German has looked in very good form at the ATP Cup and hopefully recovers from the niggle from his match against Medvedev. A fully fit Zverev will be too much for Garin.

Garin will have to play out of his skin to match Zverev’s gameplay. Expect Sascha to win in straight sets.

Also Read: “Let’s hope (the) situation keeps improving. We are doing everything”: Rafael Nadal talks about his back injury

“He will get knocked out cold,” Dan Ige vows to put...