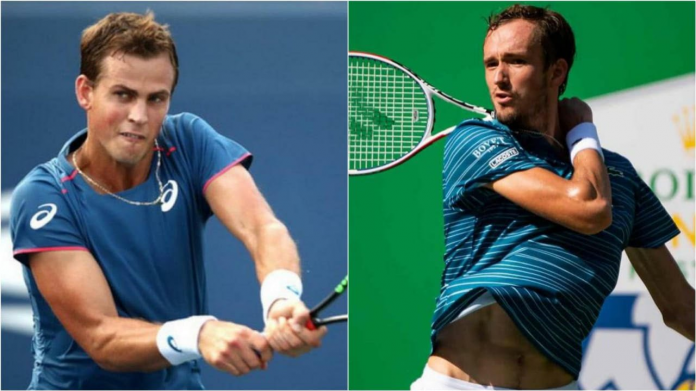 Daniil Medvedev and Vasek Pospisil will meet in the first round of the 2021 Australian Open. The Russian will start as a favourite coming into the tournament and also has an upper hand against Chardy with head to head record of 2-1.

The Russian is looking solid after remaining unbeaten in the ATP Cup till the finals. He also won the ATP World Tour Finals, 2020 by winning against the likes of Rafael Nadal, Novak Djokovic and Dominic Thiem. He would be hoping to continue his recent form and put on a good show in this year’s Australian Open. He made it to the round of 16 last year, where he lost to veteran and former Australian Open champion, Stan Wawrinka in a 5 set thriller.

Pospisil last played in the 2020 Sofia Open, where he did well by reaching the final of the tournament. He lost to Jannik Sinner in 3 sets with the last set going into the tiebreaker. The World No.61 lost in the first round of last year’s Australian Open. He lost to the veteran, Ivo Karlovic in straight sets. He would be hoping to put on a good show against the World No.4 and try to seal the match.

The duo have met 3 times in the past with Medvedev leading 2-1. They last met in Vienna, Austria in which the Russian won in 3 sets. The Canadian would like to catch-up in the head-to-head tally while the 4th seed would like to make a good run in this year’s tournament.

The Russian is the clear favourite to win the match as he comes to the tournament with high confidence and is leading in the head-to-head tally against Pospisil.

Mohamed Azhar - June 17, 2021
Indian Super League (ISL) announced a new set of standards earlier this week for the ISL 2021-22 season that require teams to have a...