The eighth tournament of the BWF World Tour 2021, the Indonesia Masters is all set to get underway at the Badung Regency, Bali, Indonesia. The marquee Super 750 tournament will witness the likes of Kento Momota and Viktor Axelsen fight it out in the men’s singles. The Masters will be held from 16th to 21st November.

In the women’s singles, Japanese shuttler Akane Yamaguchi and Ratchanok Intanon are the top two seeds. Tokyo Games bronze medallist PV Sindhu is seeded third followed by An Se-Young and Pornpawee Chochuwong. Busanan Ongbamrungphan and Michelle Li are other big guns in the mix.

With some big guns in the mix, the men’s singles title race is all set to be a mouthwatering affair at the Super 750 tournament. The Denmark Open 2021 champion Axelsen and Momota seems to be the front runner for the time being. Indians Kidambi Srikanth and Lakshya Sen could emerge as a dark horse with the door wide ajar for the title.

The absence of Tokyo 2020 medallists Chen Yufei and Tai Tzu-Ying has sprung the women’s singles title race wide open at the Super 750 tournament. Denmark Open champion Yamaguchi and Sindhu seem to be front runners for the time being. Se-Young could emerge as a dark horse with the door wide ajar for the title. 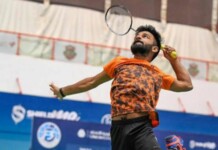