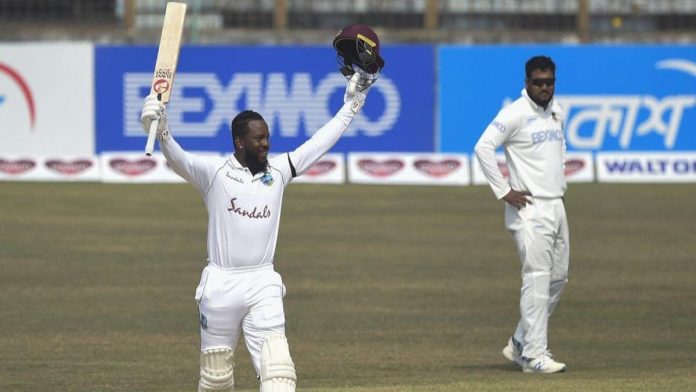 West Indies (WI) clinched an emphatic win by three wickets as they took on Bangladesh in the first Test in Chattogram. The visitors pounced upon the hosts significantly following their crushing three-match-ODI defeat in Bangladesh.

With toss favouring Bangladesh, the hosts chose to bat on the subcontinent pitch. The major contributions from Shadman Islam (59), Shakib al Hasan (68), Mehidy Hasan (103) coupled with little contributions from the other batsmen, drove Bangladesh to a decent total of 430.

From the Windies bowling unit, Jomel Warrican made a significant contribution, scalping four wickets and maintaining an economy of 2.8. The left-arm-pacer even bowled eight maiden overs.

In return, Windies batsmen were bundled for 259 where K Brathwaite (76) Jermaine Blackwood (68) were the prime contributors. From Bangladeshi’s bowling unit, Mehidy Hasan’s intent to scalp wickets was clear as he not just took four wickets, maintained an economy of 2.2 and threw nine maiden overs.

Bangladesh’s skipper Mominul Haque and wicketkeeper Liton Das contributions 115 and 69 respectively, were pivotal in Bangladesh’s 223 score to declare the innings.  The hosts had plans of bundling the visitors and notching a convincing win. With some bowling magic of three wickets each R Cornwall and Warrican, Bangladesh still managed to give Windies 409 to chase and capture a win.

Soon the dread of West Indies dominated where the debutants- Kyle Mayers and Nkrumah Bonner rose to the occasion and did the unbelievable. The duo knit a 216-run stand between them which were pivotal in changing the complexion of the match in West Indies favour. Kyle smashed a double hundred (210*) in his debut while the other debutant contributed 86 from the willow. Though Bangladeshi’s Mehidy Hasan did his best to scalp four wickets, Windies batsmen spirit seemed undeterred in their pursuit, getting them an unforgettable three-run-wicket in the away country.