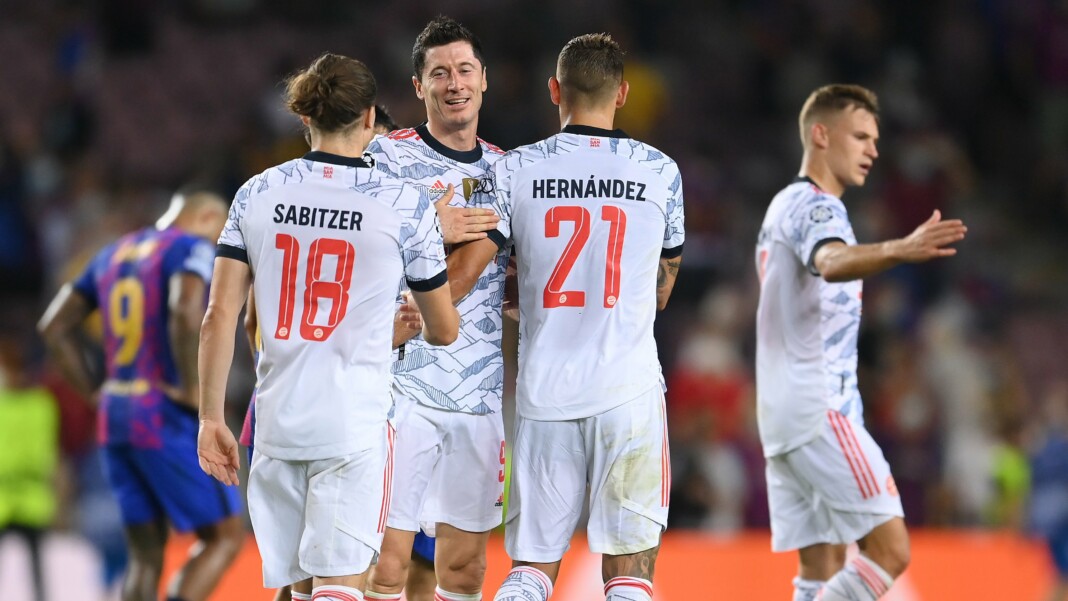 Barcelona succumbed to a 3-0 loss against Bayern Munich on Matchday one of the Champions League group stages at the Camp Nou. Thomas Muller opened the scoring followed by two strikes by Robert Lewandowski.

Let have a look at each of the players from both teams:

Marc-Andre ter Stegen (GK) (6/10): Stegen made to make a number of routine saves but nothing out of the extraordinary.

Eric Garcia (5/10): Garcia was slow without the ball and was the reason for Bayern’s first goal of the game.

Gerard Pique (7/10) Glimpses of brilliance in the game but could not dominate the Bayern strikers.

Ronald Araujo (8/10): Arguably the best Barca player on the pitch. Araujo made some key blocks and stole possession from the opposition.

Sergio Busquets (5/10): Busquets was a kingpin in the midfield but could not match the pace and stamina of the Bayern side.

Jordi Alba (7/10): Alba delivered some quality balls from the left and was the only Barcelona who posed some threat against the German side.

Pedri (5/10): Pedri failed to get going and struggled to make a mark in the game. He was overpowered by the likes of Upamecano.

Frenkie de Jong (6/10): De Jong made some quick runs inside the box but was not at the required best to pick out passes.

Sergi Roberto (5/10): Roberto had an underwhelming performance and was whistled at by the Camp Nou crowd.

Memphis Depay (/510): Depay was restricted by Bayern defence and was not of much use to Barcelona.

Luuk de Jong (3/10): The debutant had no impact on the game and was a mere ball watcher. He was slow in his runs and wasted a lot of opportunities with late runs.

Gavi (7/10): Gavi showed glimpses of brilliance with the ball in the second half and was impressive.

Yusuf Demir (7/10): Demir also was quick on transitions and changed the pace of thef fixture.

Oscar Mingueza (6/10): Mingueza was composed and calm at the back, but did much of a challenge to adhere to.

Philippe Coutinho 7(/10): Coutinho sped up the intensity of attacking moves in Barcelona and was efficient with the long rangers.

Alejandro Balde (7/10): Balde made some darting runs and was effective down the wings.

Manuel Neuer (7/10): Neuer did not have to take charge of things and got things in order.

Benjamin Pavard (7/10): The Frenchman had a decent game with him bossing the father’s side.

Dayot Upamecano (7/10): The centre back had no challenge whatsoever to contain the Barcelona side and had an easy game. However, the French international does have had problems dealing with quick wingers.

Niklas Sule (7/10): Sule partnered Upamacano in his role at the defence and excelled on it.

Alphonso Davies (7/10): Davies was botering Barcelona for a with his crazy ball throwing technique.

Joshua Kimmich (8/10): Kimmich played a free flowing band of football and was a delight to watch.

Leon Goretzka (7/10): Goretza partnered in the midfield and was effective in cutting off the supply to Barcelona midfield.

Jamal Musiala (7/10): Muisala had a splendid game and was at the best of his performance.

Thomas Muller (8/10): Muller, once again was on target and was a constant threat in the box for Barcelona. He scored the opening goal for Leverkusen with a thunderous site.

Leroy Sane (/610): Sane delivered some decent free-kicks but did not look at the best possible run of form.

Lucas Hernandez (/610): Hernandez struggled with pace and was not much effective.