Patricio Pitbull is going to face Antonio McKee at the main event of Bellator 263, this fight turned into a grudge match after the events of the pre-fight press conference, things went pretty south when these two got into a heated altercation over some personal comments.

Now Pitbull has spoken on this event for the first time, he said, “Things went south when he started to talk sh*t about respect. Everyone knows his father was saying to the media that I was on drugs. After that, he said something about would beat me in front of my family. I will make him show some respect for them. The last one who talked sh*t like this, I kicked his ass in less than a minute. Now, he deserves the same thing.”

McKee said. “I’m a 51-year-old man and you see this sh*t, I’m yaked up. This is all natural hard work but let me tell you something, to maintain that muscle genetically, its a lot harder for others versus people of color, not to bring color into it but genetically it is a little different. So I’m just looking forward to USADA making sure we get those good tests and everything is great because we are going to pass all the tests”

Also read- Hell breaks loose at Bellator 263 press conference as Patricio Pitbull and A.J. McKee get into a flurry 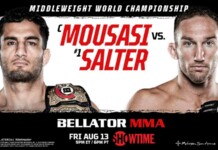