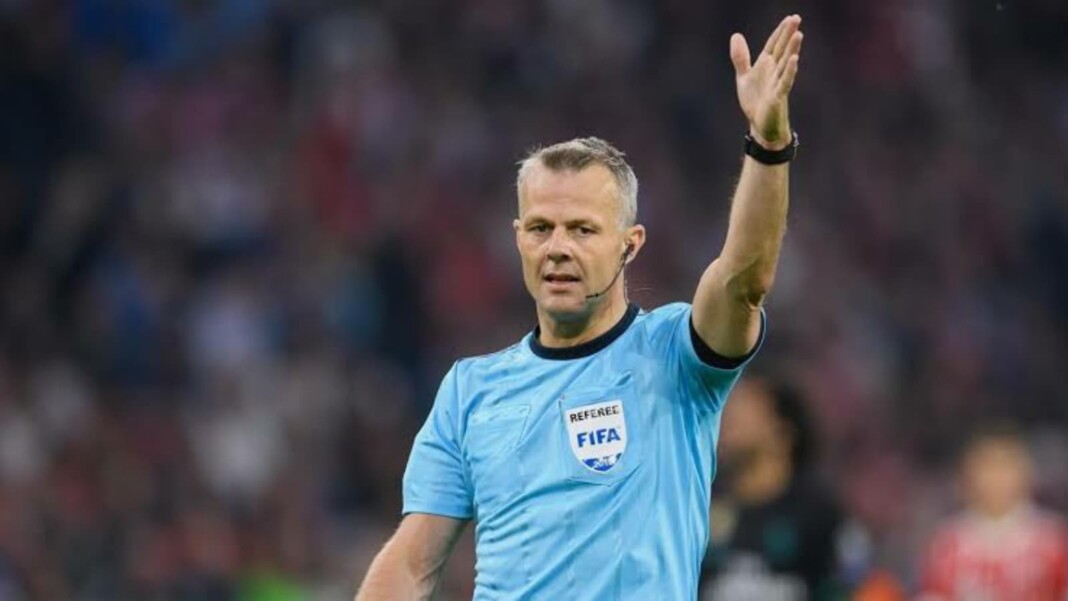 Dutch referee Bjorn Kuipers has been chosen to be the man to take charge of the Italy vs England Euro 2020 final on Sunday at the Wembley stadium. In doing so, Kuipers becomes the first referee from the Netherlands to be chosen as the main match official in a Euro final.

Kuipers began his career officiating in the Dutch leagues, and after years of working his way up the ranks, he became an international referee in 2006. At this year’s Euros, the 48-years-old Kuipers has already refereed three matches: Denmark vs Belgium and Slovakia vs Spain in the group stages and the Czech Republic and Denmark quarterfinal.

Bjorn Kuipers will be accompanied by Sander van Roekel and Erwin Zeinstra, both of whom share Kuipers’ nationality, while Carlos Del Cerro Grande from Spain will be the fourth official. The reserve assistant referee, also Spanish, is Juan Carlos Yuste Jimenez.

As for the officiating team in charge of VAR, German referee Bastian Dankert will be the primary Video Assistant Referee and he will be assisted by Pol van Boekel, Dutch, and Christian Gittelmann and Marco Fritz, who are both German.

Sunday’s appointment will be Bjorn Kuipers’ seventh UEFA competition final appearance. He has previously officiated two Europa League finals and one Champions League final. Kuipers has also refereed at Euro 2012, the 2014 World Cup, Euro 2016 and the World Cup in 2018, staged in Russia.

Kuipers was also a candidate to referee the final at the 2014 World Cup but then had to go home because the Dutch national team reached the semi-finals in Brazil. Missing international football’s biggest match is an unfortunate coincidence he still sees as the biggest disappointment of his career.

As the oldest referee at this European Championship, Sunday’s match may well be Kuipers’s final appearance at an international tournament, the crown on a brilliant career as a referee. Speculation that he might retire after the Euros was added weight with Kuipers’ comments before the tournament

Prior to the tournament, Bjorn Kuipers had said that he did not know whether he would continue after the summer. “I’ll see, I still feel very fit,” he said. “I’ll let my decision mainly depend on feeling. How things are going at home, how the European Championship will unfold. After the European Championships, I will go on holiday and then see what choices and possibilities present themselves.”

Italy vs England is the matchup in the final that brings the curtains down on an enthralling tournament with all kinds of drama. Be sure to check out the pre-match news and keep yourself updated before the spectacle begins tonight.