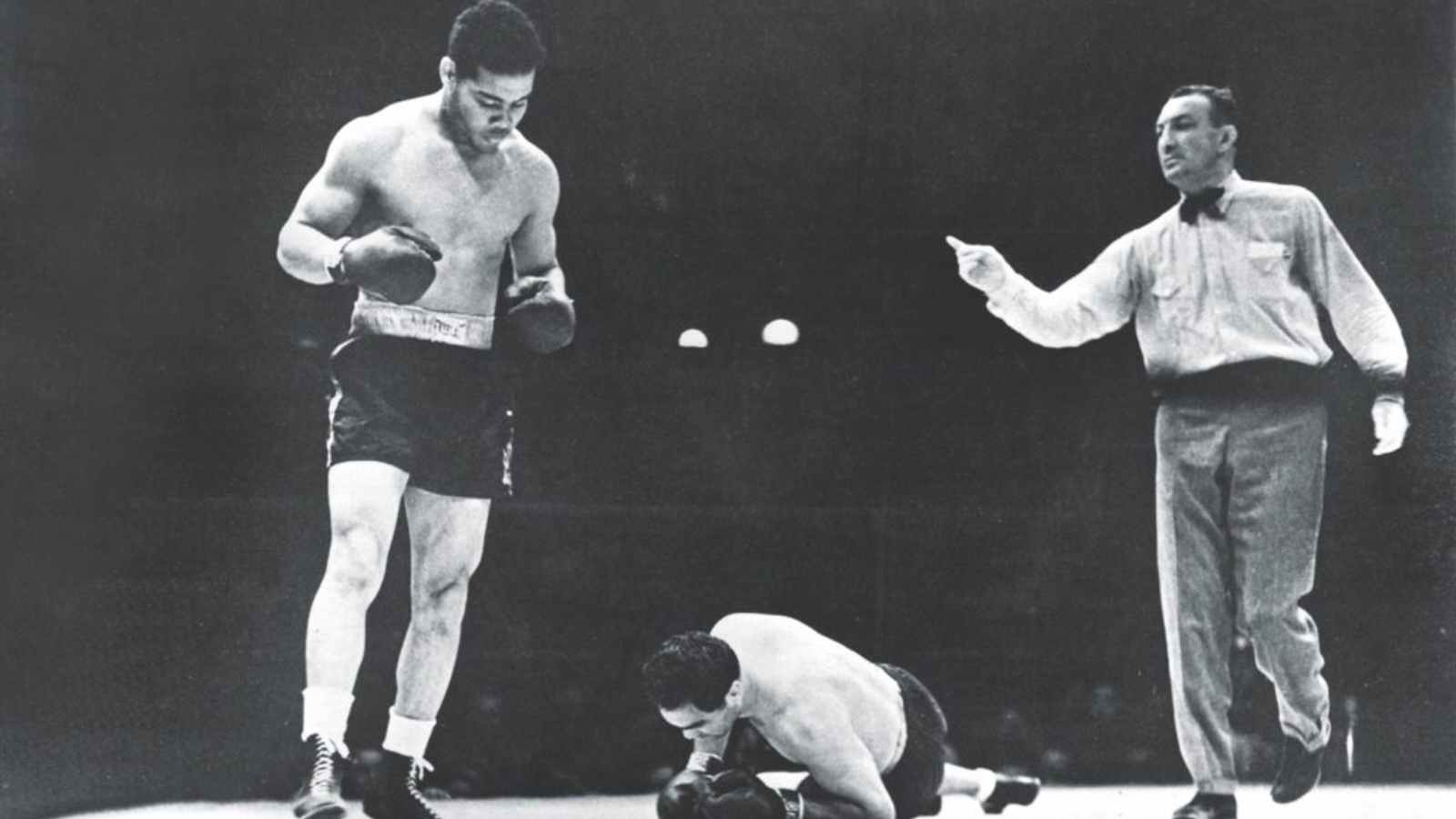 Louis stands tall over Schmeling in their second fight

Joe Louis and Max Schmeling were two small-town boys with a love for fighting who never knew that they would be at the center of a worldwide battle for supremacy. The two heavyweights crossed paths at an unlikely point in both their careers and what happened after is a rivalry for the history books that had the world on edge.

Schmeling was born in Klein Luckow, a village in northern Germany in the year 1905. However, the world he was born into and the world he would end up fighting in were two different entirely different entities. Literally, born into a Germany that still had its kings and Prince, by the time Max grew up and started fighting professionally in 1920, World War had taken its toll on Germany and had left it in a ruinous semi-democratic state.

In this country suffering under the heavy cost of war reparations, Schmeling became a national hero as a village boy with his eyes set on capturing the world. However, by the time he entered his prime, his nation had been taken over by a new political movement, the Nazi Party headed by Adolf Hitler.

The other side of the story starts in the US South, in Lafayette, Alabama where Joe Louis was born to children of former slaves in a household of 8 siblings. Having suffered the brunt of the deeply segregated South, the family moved to Detroit where they settled. Lying to his mother, who set him to be a part of violin lessons, Louis would hide his boxing gloves in the violin case and go out to the local youth recreation center to test his limits and hone his skills.

Related: The Night Muhammad Ali nearly killed himself to overcome Joe Fraizer at the Thrilla In Manila

By the time Joe Louis started boxing, the color line had already been broken by former great, Jack Johnson and hence was eligible to win the undisputed championship. However, by the time he started his professional career in the 1930s due to the controversy created by Johnson before him, the mostly white promoters in boxing were weary of having another black champion.

This was settled after Louis signed an agreement to be “decent” unlike Johnson who married white women, in order to avoid provoking the white audience. From here on, Joe was titled America’s sweetheart who would capture the world heavyweight championship for her.

To start off his career, Louis was paired against former champions and contenders in his rise up the division. In that light, Schemling, at 31 was already considered old for the division and hence would’ve been a perfect tune-up for the young gun. Moreover, the additional symbolism of beating an Aryan ambassador by a black American was not lost on the promoters.

However come fight night, due to negligence from his corner and a lax approach on Lous’s part, he was tested to the limit by the aging heavyweight. In the 12th round, Max Schmeling would knock down Louis, and hand him his first ever professional loss in 25 fights.

Upon his return to Germany, Max was heralded as a Hero who stopped the seemingly unstoppable American heavyweight. Arguably the reception was even better than when he captured the heavyweight title a few years earlier. However, it was a troubling situation for Schmeling himself. Though he never outright stated it during the time, he did not agree with the methods of the Nazis.

Famously his manager was a Jewish American and during the Kristallnacht, a pogrom against Jews in November of 1938, he helped 2 Jewish boys find refuge in his estate. These actions would have him fall out of favor with the Nazis but that was later on.

While Schmeling was on his victory tour, Louis stepped up his training and eventually captured the heavyweight title from Jim Braddock, more popularly known as “Cinderella Man”. However, he openly stated that he would feel like no champion until he beat Max, the only man to knock him out.

And hence the two were booked to fight in 1938, this time with the full backing of Adolf Hitler and the third Reich behind him. However, unlike last time none in Joe’s camp were complacent nor was he distracted. Training day and night to prove himself against the only man to beat him, Joe was lost in the grind preparing to face his only loss, not far away from Harlem, a neighborhood for African Americans. This was noticed by Josef Goebbels, Hitler’s propaganda minister who advised the Nazi leader against broadcasting the fight sensing impending doom. Among the many things Goebbels got wrong, this was not one of them.

In their rematch in 1938, Joe Louis defended his championship in marvelous fashion, knocking out the German in the very first round. The world, which was on the brink of a world war, collectively rejoiced in the defeat of a Nazi symbol.

White Americans applauded the grandson of a former slave on his victory with him being recognized as an American for the first time in his life. Louis would go on to become the longest reigning heavyweight champion ever, losing his title only in 1949. He retired as an American icon, especially among the African American people.

Author Maya Angelou described the feeling among Black America best as she wrote, “Champion of the world. A Black boy. Some Black mother’s son. He was the strongest man in the world. People drank Coca-Cola like ambrosia and ate candy bars like Christmas.”

Max Schmeling on other hand was welcomed back home as a disgrace, abandoned by the veyr government that held him up on their shoulders not too long ago. Moreover his association with his Jewish Manager and his actions during Kristallnacht would end up getting him drafted to fight in the war. He would unsuccessfully try to make comeback after the war before permanently retiring from the sport,

Years later after the fall of the Reich, Max and Joe were reunited where they would begin a friendship that would last the rest of their lives. To put this in perspective, Hitler, a man who still stands as the symbol of hatred among humans, had his favorite boxer, grow a lifelong friendship with a man of slave descent. That was a true win for humanity more than anything else. When Joe Louis died at the age of 66, one of the Paul Bearers at his funeral was none other than the small town German boy who along with him had unwittingly gotten entangled in a global war for supremacy

Also Read: “The War” between Marvin Hagler and Tommy Hearns set the standard for every brutal slugfest in combat sports