The former UFC Welterweight champion, Tyron Woodley is going to face Jake Paul at his professional boxing debut match in August. Woodley has been recently cut from UFC after losing four consecutive fights and now he desperately wants to come back in the win column.

To secure a win in this fight Woodley is working really hard on his skills, which also includes training with one of the greatest boxers of all time, Floyd Mayweather Jr. Talking about it in his latest interview with Fight Hub TV, Woodley says,

“He came in yesterday and we trained and he really wants to help me, I learned so much. If I never got the chance to work with him again, I learned enough little, small details and small little back pocket tricks that will take me through this fight and maybe through a couple fights.”

Jake Paul holds a professional record of 3-0 and in his last fight he knocked out the former UFC Welterweight fighter, Ben Askren in the very first round. But Woodley isn’t concerned about all this and he thinks every plan of Paul is going to fail when he’ll be entering the boxing ring.

Woodley added, “When people press me, they get knocked the f*ck out, every single time, who’s pressed me and not got knocked out? When I sat back and I let people in on the fight and I let people be like, ‘Ah, I’m waiting on Tyron to do what he normally does’ and when I didn’t do it, it gave them the confidence and courage to walk down. Then they’ve got a chance.” {H/T MMA Fighting}

“I think he’s got enough intelligence – he’s stupid as hell but he’s smart as f*ck on the low – he’s gonna be coached by people that tell him, ‘Okay, this is what he did, the people that did good against him, they did this.’ Who would not look back? He’s got way more footage of me than I do of him.”

Tyron Woodley continued, “He’s gonna watch so much film, so many people are gonna watch it, they’re gonna break it down, people I’ve trained with, sparring partners, coaches probably, he’s gonna do whatever it takes to get any intel because he has to. He can’t make up for 30 years as an athlete.”

Although, Woodley lost his last four fights but he lost all of them against the top-ranked fighters in the world, unlike someone like Jake Paul. The only advantage Paul is having in this fight is his age and Woodley thinks this gamble is going to hurt him badly.

He added, “Darren Till’s power was power that could give me worry and so was Robbie Lawler and they didn’t land one punch the whole fight, did they? Robbie Lawler had two fights of the year. Robbie Lawler had one of the greatest fights against Carlos Condit and Rory MacDonald.”

“You never saw a drip of blood leave my face, nor did Darren Till. I broke my hand on his nugget. So I’m not disrespecting him but my reality on what people are capable of doing caused me to train at a level that I needed to train and I’m going to train at that same level.” {H/T MMA Fighting}

Tyron Woodley concluded,  “Any puncher that I fought, any knockout person, anybody with power – Paul Daley never stung me, never hit me, never dropped me. The people that were known and could do those things, they didn’t do it to me, I did it to them.”

“Sounds like he’s on the piss,” Alexander Volkanovski reacts to Conor McGregor’s disrespectful callout after UFC 266

“I’m about to lose the belt deep,” Alexander Volkanovski reflects on Brian Ortega’s submission attempt at the main event of UFC 266

“About fu**king time keep doubting me I love it,” Alexander Volkanovski wants people to put some respect on his name 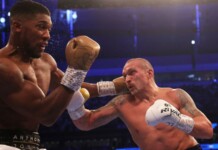