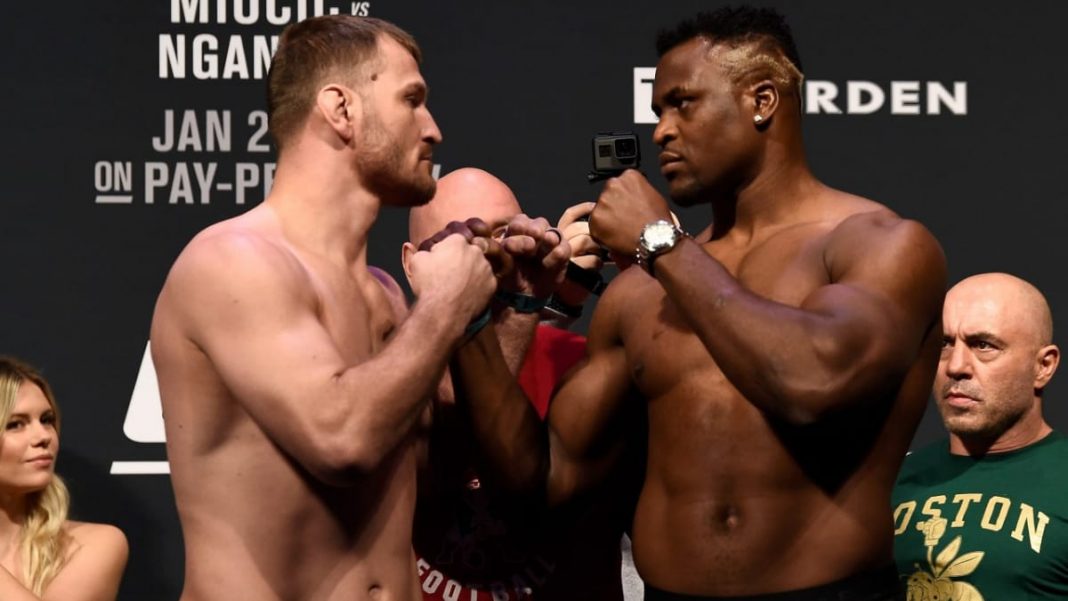 Francis Ngannou will be looking for revenge, come the 27th of March, at UFC 260. The number one ranked Cameroonian heavyweight will be looking forward to striking rich, when he takes on the champion Stipe Miocic, for the heavyweight title. The pair already met back in January 2018, at UFC 220, which Stipe won via. unanimous decision. Francis is more improved and looking more dangerous than ever.

A lot of fighters have begun giving their predictions for the fight, and up and coming heavyweight Ciryl Gane was one among them. Gane, who recently beat Jairzinho Rozenstruik, speaking to MMA Fighting at the UFC Vegas Media day picked his winner for the Stipe vs Ngannou rematch.

‘He should be winning this fight before the end’

“If Francis learned from the first fight with Stipe, he should be winning this fight before the end,” Gane said. Stipe Miocic thoroughly outclassed Francis Ngannou, the last time the pair met. Wary of Ngannou’s unbelievable, the heavyweight king Miocic, kept Ngannou at bay, the entire fight.

Since their fight at UFC 220, Miocic has just fought with one opponent, although thrice – Daniel Cormier. He lost to DC at UFC 226, but came back strongly in the next two fights at UFC 241 and UFC 252 respectively. Ngannou, on the other hand, has learnt a lot since his loss to Stipe Miocic. Though he slid further after the Miocic bout, losing to Derrick Lewis, he went on a rampage after that, finishing all his next 4 opponents in the first round, including the likes of Cain Velasquez, Jairzinho Rozenstruik (unbeaten then).

What are your thoughts on this? Do you agree with Ciryl Gane’s prediction?

Also Read : ‘I’m sure I can beat Anthony Joshua with one arm tied behind my back’

Auri Ghosh - April 14, 2021
Fabio Fognini will take on Jordan Thompson in the Second round of the Monte Carlo Masters 2021. Fognini is currently the World no.18 on...