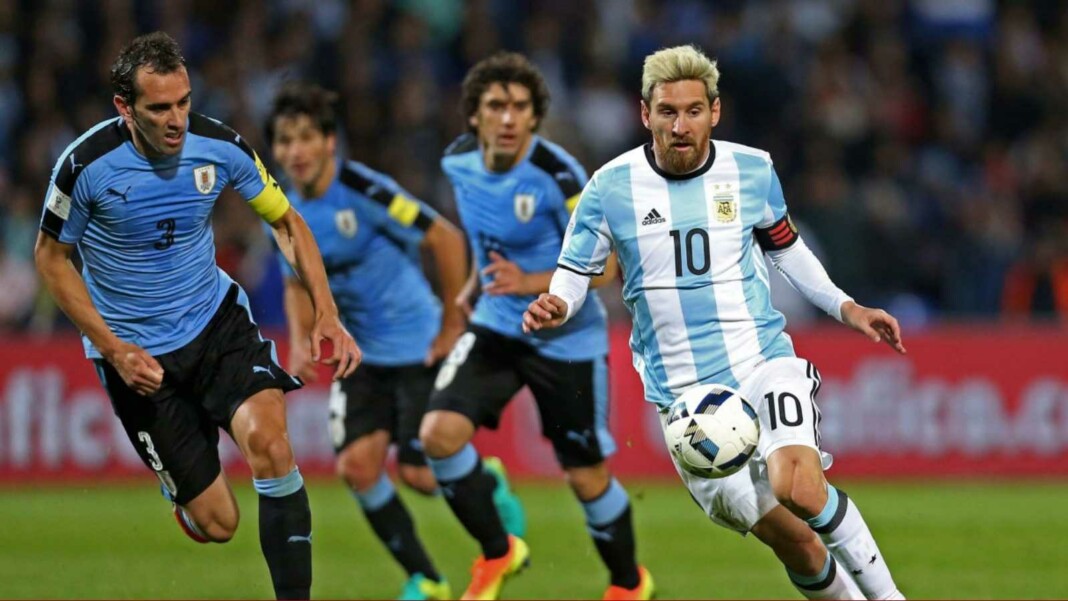 Lionel Messi and co. are still in the search of their first win in the Copa America 2021 after being held 1-1 by Chile. Messi, however, put in a stellar performance with a brilliant freekick and created a few opportunities for the strikers to get on the scoresheet. Unfortunately, to the disappointment of the Argentina supporters, none of those were to beat Claudio Bravo, who was guarding Chile’s goal.

Uruguay’s form has been a matter of concern for Oscar Tabarez as they failed to beat Paraguay and Venezuela in the two World Cup qualifiers just before the start of Copa America. Uruguay’s strikers, Edinson Cavani and Luis Suarez have been in great form for their respective clubs which is something to build upon for the struggling team. Uruguay play their first match today in Copa America 2021 and it is sure to be a tough test against lionel Scaloni’s side who would be desperate to get the three points in the bag.

Argentina vs Uruguay Head to Head

As far as the head-to-head record is concerned, La Albiceleste have come out victorious in each of their four previous Copa America round-robin encounters with the Uruguayans, keeping a clean sheet three times in the process. Clasico del Rio de la Plata is international football’s most-played fixture, with Argentina leading the all-time H2H record by some distance.

Out of all the games played between the two South American Giants, Argentina have won 90 of those matches while Uruguay had the last laugh in 58. The other 48 have resulted in both nations canceling out each other. Argentina are currently on a four-game unbeaten run against Oscar Tabarez’s men, who have failed to net a goal on three of those occasions.

Argentina would need to improve their performance in the final third if they are to leave the stadium with smiles on their faces. They have the star power to create problems for any backline but the goals are what counts, ultimately. Players like Lautaro Martinez and Nicolas Gonzalez who absolutely made a mess of decent opportunities that fell their way should pick up their levels immediately. The defence line is also a major area of concern for Scaloni but Cristian Romero’s inclusion could be a boost for the team. With the likes of Sergio Aguero, Angel Di Maria, and Giovani Lo Celso also available, Argentina should make the most of their resources.

Uruguay would be looking to start their Copa 2021 journey with a win. But they face a mighty hurdle in the name of Argentina and need to be on their toes throughout the whole game. But with two deadly strikers upfront and Argentina’s defence being known to be shaky, Uruguay have a fair chance of snatching a victory. At the moment the form of the team is the only concern for Oscar Tabarez, who has decent talents in the form of Federico Valverde, Jose Gimenez, Diego Godin, Martin Caceres and Lucas Torreira to support their in-form forwards.

Who will win Argentina vs Uruguay

This is a tough one to call with plenty of offensive talents on display. With form and momentum favoring Lionel Scaloni, Oscar Tabarez has the advantage of a more balanced squad. The encounter is expected to be a cagey and nail-biting one with both teams wanting to gain momentum in the group stages. But a lot will depend on the man for every moment, Lionel Messi, who can rip apart any team, on any given day. Though Argentina are expected to eventually edge the battle, the execution would be tougher than it looks like right now.

Also Read: COPA AMERICA 2021: Argentina vs Uruguay LIVE stream: When, Where, and How to Watch