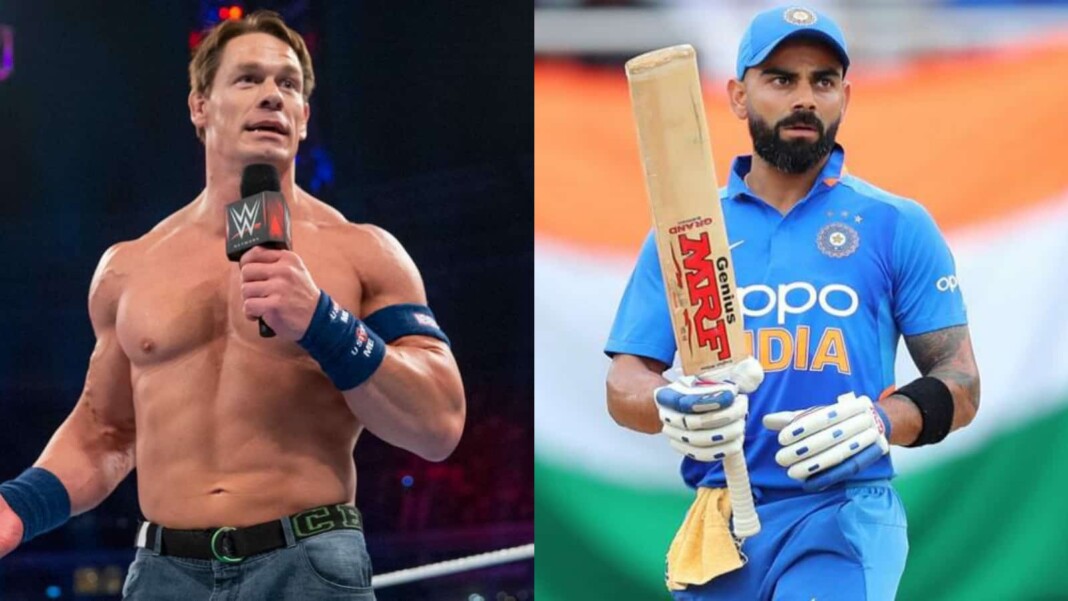 India skipper Virat Kohli is undoubtedly one of the best modern-day cricketers across all three formats of the game. Ever since his international debut in 2008, the Delhi cricketer has grown leaps and bounds in his glorious career.

The 32-year has led India to various famous victories in every format across the globe. As a result, Virat Kohli has been lauded by various celebrities and superstars of their respective fields and industries. This includes the likes of Indian Bollywood legend Amitabh Bachchan, England football team captain Harry Kane and Indian Prime Minister Narendra Modi. Meanwhile, ace World Wrestling Entertainment (WWE) wrestler John Cena also showered his love for the ‘Modern Master’.

In a recent post uploaded on Cena’s mysterious Instagram account, he shared an old picture of the Indian cricketer while batting in a limited-overs game. The wrestling star is famous for uploading candid images on his social media handles, and the followers have the onus to understand the context. Interestingly, his Instagram bio also reads: “Welcome to my Instagram. These images will be posted without explanation, for your interpretation. Enjoy”.

Something similar happened during the 2019 ICC Cricket World Cup as well where John Cena posted a photograph of Virat Kohli with some other Indian team members in the background.

The legendary wrestler left the cricket fraternity fans curious to draw context from his post on June 12, 2021. Netizens started coming to various conclusions and one of the most popular was that Cena is rooting for Virat Kohli’s team India at the all-important ICC World Test Championship (WTC) Final against New Zealand.

Despite numerous accolades under his belt, Virat Kohli still awaits his maiden ICC trophy as the skipper of the national side. The WTC Final holds a decent opportunity for him to break this jinx and clinch the maiden title of this tournament as well.

India and New Zealand are set to face each other at the much important game from June 18 to June 22 at the Ageas Bowl, Southampton. The Kiwis are currently playing the second Test match against England while the Virat Kohli-led side is practising in the English conditions.