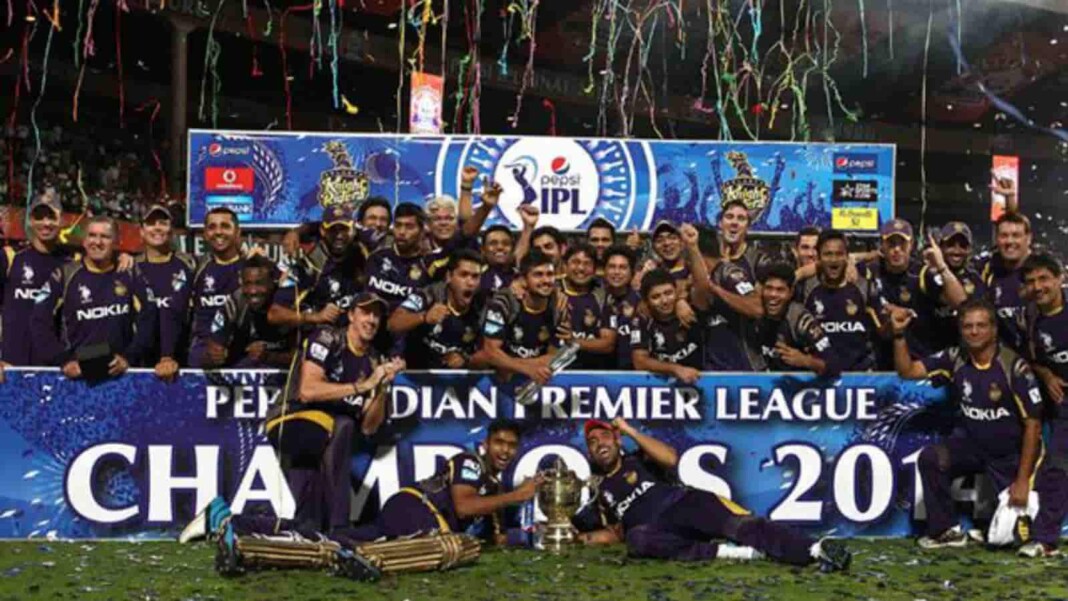 Brendon McCullum’s blockbuster launch of the IPL into stratosphere. John Buchanan’s abject failure of the four-captain theory. Shah Rukh Khan’s scuffle at Wankhede and cartwheels of joy at Chepauk. KKR do not do things the traditional way. There are no straight forwards in this world.

We arrive in Kolkata for the fifth article of the series – best all-time IPL teams. The heartland of the nation, Kolkata’s team KKR has been a source of extremes in the IPL since its inception in 2008. Much like the city of Kolkata itself, KKR’s penchant for theatrics has served the IPL very well in terms of headline acts.

This is the team that has won a record 9 straight games to win the title in 2014. KKR have also lost 9 consecutive games to finish last in 2009. KKR is the only team to have their players win the IPL Man of the Tournament on four separate occasions. Yet, KKR is one of only two teams to have never had their player win the IPL Purple Cap award.

This extreme of KKR manifests itself off the pitch too. They display unprecedented grandeur in victory – rallies and victory parades involving their co-owner from Bollywood, the CM of the state and their fans gathering in thousands at the iconic Eden Gardens. In disagreement, they can make this same Eden Gardens feel farthest from home. Thus, one must tread carefully in picking 11 heroes of KKR.

For the purpose of full disclosure, in selecting the XI players for our side, we have kept certain soft guidelines. Firstly, importance has been given to KKR’s most successful period, particularly, the 2012 and 2014 seasons. Secondly, a strong consideration has been made on the home conditions of the team in their successful periods. In KKR’s case, the Eden Gardens between 2011 and 2015 was a slow wicket that helped the spinners and medium pacers who took the pace off. Thirdly, the captain’s style of leadership has been taken into account. Finally, the team will comprise no more than four overseas players.

There can be no debate that Gautam Gambhir is the team’s most successful captain and has, in fact, defined the identity of KKR in the IPL. The southpaw will lead the side and open the batting for KKR. He won two IPL titles at Kolkata and scored 3345 runs at an average above 31.

Joining Gambhir to open the batting is the Robin to his batman from the 2014 campaign – Robin Uthappa. Recency bias has slightly soured the love for Uthappa in these parts but his contribution to KKR’s second IPL title will never be forgotten by the KKR faithful. Uthappa scored 660 runs and won the Orange Cap in 2014.

At number 3 is Manish Pandey who starred in the final of the 2014 edition. His innings of 94 to win KKR the IPL is one of the lasting impressions of the marquee clash of the tournament. Pandey hit six sixes in that innings and was perhaps playing the best cricket of his life while at KKR.

Following him at 4 is Jacques Kallis. The South African is an elite all-rounder of the game and won quite a few matches for KKR with both, bat and ball. While Shakib Al Hasan can also lay claim to this place, Kallis has more runs and wickets for KKR. He will also provide better balance given the bowling combination picked. Kallis can also be a floater, batting at 4 if early wickets fall or making way for the big hitters if KKR get off to a flier.

Dinesh Karthik will bat at 5 in this side and be the designated finisher for KKR. He will also don the gloves. In 2018, DK led KKR to a third-place finish in the IPL scoring 498 runs at a strike rate of almost 150. If not for perhaps the greatest one man all-round performance by Rashid Khan, KKR may well have made the final in that season.

This is KKR’s biggest advantage. They have a plethora of all-rounders. Apart from Kallis who is equally good with bat and ball, coming in at number 6 is Yusuf Pathan. The Baroda all-rounder is a bona fide match winner and has, over the years, played unforgettable knocks in big games. His 72 off 22 against SRH in IPL 2014 is one of the enduring memories of the IPL.

At number 7 is two-time MVP winner Andre Russell. No game of the IPL is ever over till Russell is batting. His 2019 season with the bat was one of the most destructive in IPL history. With the ball, Russell can bowl at the death and to start off, with his deceptively quick balls.

Another floater, at 8 on paper and anywhere in reality, is Sunil Narine. At his peak, Narine’s 4 overs were a bank. Opponents started with 16 overs in mind as Narine was almost impossible to hit. In his forever 2.0 version, Narine is a dashing opener, dismantling bowling attacks.

Joining him at number 9 is Piyush Chawla. An all-rounder in his prime, he took 66 wickets for KKR and won the IPL in 2014, where he hit Mitchell Johnson for a crucial six in the final.

Rajat Bhatia won the toss up with Umesh Yadav and furthers the tail with batting ability at number 10. Bhatia is a canny and underrated bowler who flourished in the sluggish pitches of Eden Gardens. He won the IPL in 2012 with KKR and picked up 36 wickets at an economy rate of 7.16 in 3 years.

Completing the team is the fourth overseas pick, fast bowler Morne Morkel. The tall pacer could extract steep bounce and pace out of any pitch. He bowled the tough overs for KKR between 2014 and 2016 at a decent economy rate of 7.8 and picked up 32 wickets.