PLaying their first match in their indigenous kit, the Brisbane Heat beat the Sydney Sixers in style. Heat’s new kit was designed by their only indigenous player Mikayla Hinkley. While her team put up a stunning performance, Hinkley was phenomenal on the field in sporting the kit designed by her.

While the 23-year-old couldn’t contribute much with the bat in the small run chase, Hinkley came up with a Herculean effort on the field. She grabbed a screamer to get rid of Nicole Bolton who was the Sixer’s best batsman of the match. It was her wicket which helped the Heat restrict the opposition to a paltry 91.

Stationed at long-off, Mikayla Hinkley took a blinder diving to her left to send the dangerous Bolton packing. When it looked like she was ready to take off, Hinkley came up with an extraordinary effort to dismiss her off  Jess Jonassen‘s bowling. Having taken a screamer, the young cricketer took off in celebration pointing at the jersey she had herself designed.

It was a match the Sixers had to win to keep their hopes of a finals place alive. But a batting collapse saw them succumb to their third loss on the trot. “We’re actually really enjoying one another’s company, it’s just a shame we can’t really put a complete performance together,” said Sixers star Alyssa Healy. 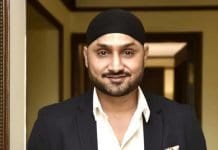