Australian opener Mitchell Marsh is enjoying a tremendous run with the bat. From the Big Bash League to the domestic circuit, then to the T20 World Cup and now back in the BBL this season, Marsh continues to shine. The all-rounder was adjudged the Man of the Match in the final of the T20 World Cup 2021 as he helped Australia to its first title.

Mitchell Marsh was a rock at number three for the Men in Yellow in the recently concluded World Cup. He played crucial knocks against the West Indies in a do or die match before stepping up in the knockouts to help his side to the elusive title. Back in the Orange for Perth Scorchers, Marsh continues to shine.

Having missed the first two games for the Scorchers, Mitchell Marsh returned with a scintillating ton against the Hobart Hurricanes. However, in his very second game, he failed to convert a great start against the Hurricanes as he fell to a bizarre dismissal. Marsh was dismissed by Tom Rogers off a full toss.

The incident took place in the ninth over of the game as Marsh looked all set to take off. To everyone’s surprise, Rogers bowled a juicy full toss outside off stump and instead of nailing it to over the ropes, the stylish all-rounder chopped it onto his stumps. Rogers burst into a laugh as Marsh trudged off with disappointment.

The Scorchers ended up winning the game by 42 runs as their dreamy start to the league continues. They are the table toppers with four wins out of as many games. The Ashton Turner led side is the only unbeaten team in the BBL this season and they will be looking to keep it that way as they march on towards their fourth title. 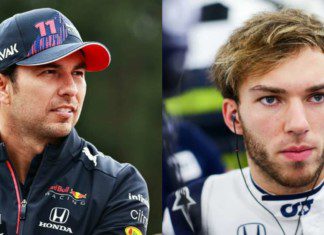 Rishabh Negi - January 23, 2022
Pierre Gasly was hands down one of the stands outperformers of the 2021 Formula1 season with the fantastic outings he had for the RedBull...