Following a rocky start, Bangladesh recovered well to breach the 300-run mark in the first Test against Pakistan. Gritty knocks from Mushfiqur Rahim and Liton Das saw the hosts put up an impressive total of 330. The duo stitched a 174-run stand to wear down the Pakistan bowlers as Bangladesh now have a chance to fight back.

Liton top-scored as he brought up an impressive century as Rahim perished for 91 as he missed out on a well-deserved ton having done all the hard work. Among others, Mehidy Hasan chipped in with a 38 run knock as he remained unbeaten. For Pakistan, Hasan Ali emerged as the weaker in chief as he bagged a five-wicket haul.

Having pulled off a scintillating repair job, Mushfiqur Rahim looked to attain the magical three-digit figure but fell short after coming agonisingly close. While Rahim’s gritty 91 was one of the best innings of his career, his reaction after being hit on the leg off Shaheen Afridi’s bowling stole the spotlight on day one.

The incident happened during the 88th over of the Bangladeshi innings as Shaheen Afridi charged in with some intent. Only to bowl a misdirected delivery down the leg which caught Mushfiqur Rahim above the thigh pad. As the ball trickled off towards the boundary, Rahim could be seen making weird faces as the ball hit flesh around the waist.

In reply to the hosts’ first innings total, Pakistan has got off to a great start. As the second day of the opening Test draws to an end, the visitors stand at the score of 144 without losing a wicket. Openers Abid Ali and Abdullah Shafique are looking in sublime touch having brought up their half-centuries. 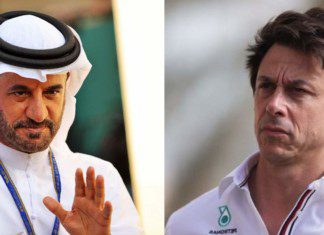 Rishabh Negi - January 14, 2022
Toto Wolff the Mercedes Team Principal is all set to meet the new FIA President, Mohammed Ben Sulayem in the coming days. It is...