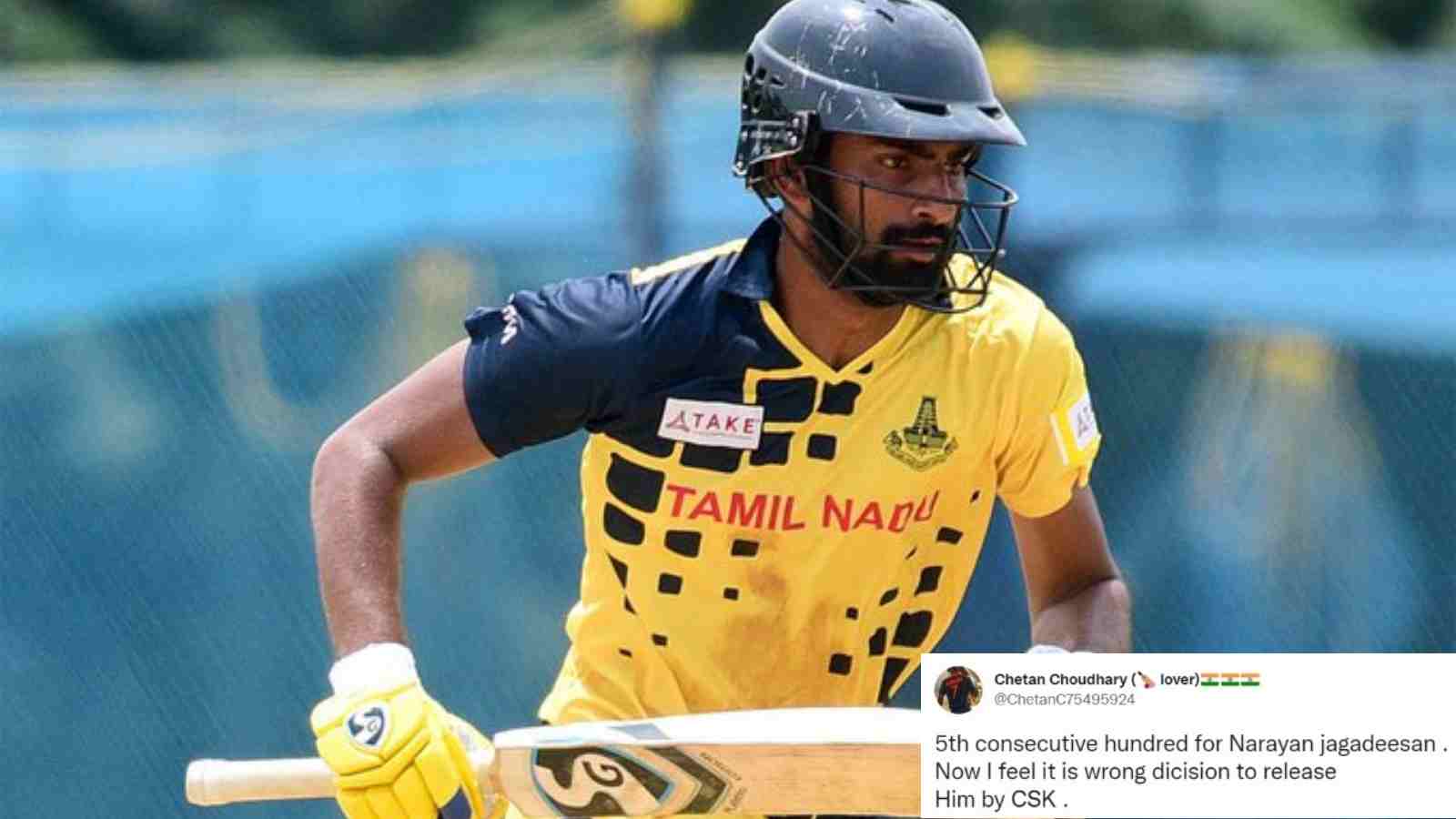 Tamil Nadu cricketer Narayana Jagadeesan played for MS Dhoni-led Chennai Super Kings but the franchise released him ahead of the auction for the Indian Premier League 2023. In the ongoing Vijay Hazare Trophy against Arunachal Pradesh at the Chinnaswamy Stadium in Bengaluru, the youngster achieved numerous feats by breaking long-held records by great players like Kumar Sangakkara, Virat Kohli, and Rohit Sharma.

The 26-year-old slammed five consecutive tons to become the first player in cricket history to do so. Previously, he produced a ton against Andhra Pradesh (114*), Chhattishgarh (107), Goa (168), and Haryana (128).

Against Arunachal Pradesh today, he hammered a 141-ball 277 runs, which was studded with 25 fours and 15 sixes. His five consecutive centuries broke Sangakkara’s record of four back-to-back tons that he completed in the 2015 ODI World Cup (still it’s unbroken in international cricket). The Tamil Nadu cricketer surpassed Virat Kohli, Prithvi Shaw, Ruturaj Gaikwad, and Devdutt Padikkal to smash five centuries in any List A season.

Although Jagadeesan’s century came off 75 balls, his acceleration saw him completing his double-century in just 114 balls, which became the fastest double-century by an Indian and joint-fastest in men’s List A cricket. Travis Head also played 114 balls to score a double ton against Queensland in the Marsh One-Day Cup last year. In terms of strike rate, Jagadeesan’s 196.45 supersedes Head’s 181.1 when he scored 230 off 127.

Not just that, it has now become the highest score by an individual in List A cricket, by breaking England’s Alistair Brown’s 268 while representing Surrey against Glamorgan in 2002. Jagadeesan surpassed Rohit Sharma, who scored 264 against Sri Lanka, to break this record as an Indian.

Jagadeesan and his batting partner Sai Sudarshan also scripted history by surpassing West Indies’ Chris Gayle and Marlon Samuels’ 372-run stand at the 2015 World Cup for the first wicket against Zimbabwe. The two Tamil Nadu batters added 416 for the first wicket. Their centuries took the team to a 500-plus run in Men’s List A Cricket to become the first team to do so. Previously, England held that record with their 498/4 against the Netherlands earlier this year.

Jagadeesan also smashed 15 sixes, the most by any batter in the tournament, which led him to go past Yashasvi Jaiswal’s 12 sixes against Jharkhand in the 2019-20 season. Jagadeesan also scored 799 runs in this tournament and is behind Prithvi Shaw’s 827.

ALSO READ | “He is definitely from another planet!”- Twitter goes berserk as Suryakumar Yadav’s blazing knock breaks series of records