Right after completing his century, Michael Bracewell trapped Rohit and was finally able to give the first breakthrough to the Kiwis. 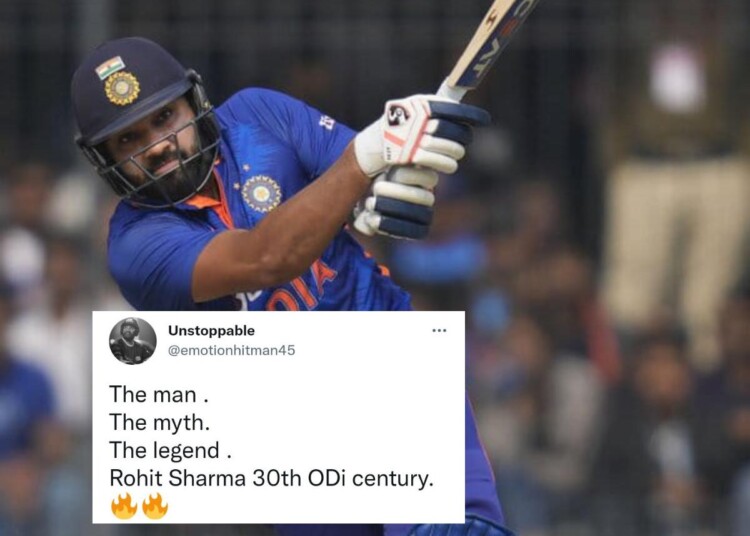 India skipper Rohit Sharma slammed his 30th ODI century in international cricket after over a period of three years. He along with his opening partner Shubman Gill stitched a 212-run stand against New Zealand in the third ODI at the Holkar Stadium in Indore on Tuesday (January 24). This opening partnership in ODI is also the highest since 2019.

Right after completing his century, Michael Bracewell trapped Rohit and was finally able to give the first breakthrough to the Kiwis. On the first ball of the 27th over, Bracewell delivered a flatter one and Rohit attempted to swing it. As he failed to connect, the ball shattered the stumps to end a fantastic knock.

Rohit would have scored his individual fastest ton had he completed his century off 81 balls. Nevertheless, he smacked nine boundaries and six maximums to score 101 runs off 85 balls.

Soon, Blair Tickner then got rid of Gill two overs later. Gill tried to whack the short ball toward the offside, but it only traveled high before Devon Conway settled it to the delight of the Kiwis. Gill batted at a strike rate of 143.59, scoring 112 from 78 balls, laced with 13 fours and five sixes.

The 23-year-old has been in phenomenal form; he previously smashed a ton against Sri Lanka, then a double ton in the first ODI against the Kiwis, an unbeaten 40 runs in the second ODI (India did not have many runs to chase), and now again, a century.

Gill also created a new record following his knock. He now tops the list of most runs in the three-match ODI series with 360 runs, equalling Babar Azam‘s record which he scored in 2016 against West Indies.

Two big fishes exited the field after playing fine innings. Now good knocks will be expected from the two new batters, Virat Kohli and Ishan Kishan who are at the crease right (at the time of writing this article). Virat has already smashed two fours and a six and is playing on 20* off 10 balls, while Kishan hasn’t opened his innings yet.

Meanwhile, if India win this match, they’ll whitewash the series 3-0. This would mean the Men in Blue’s moving onto the top of ICC’s ODI ranking.