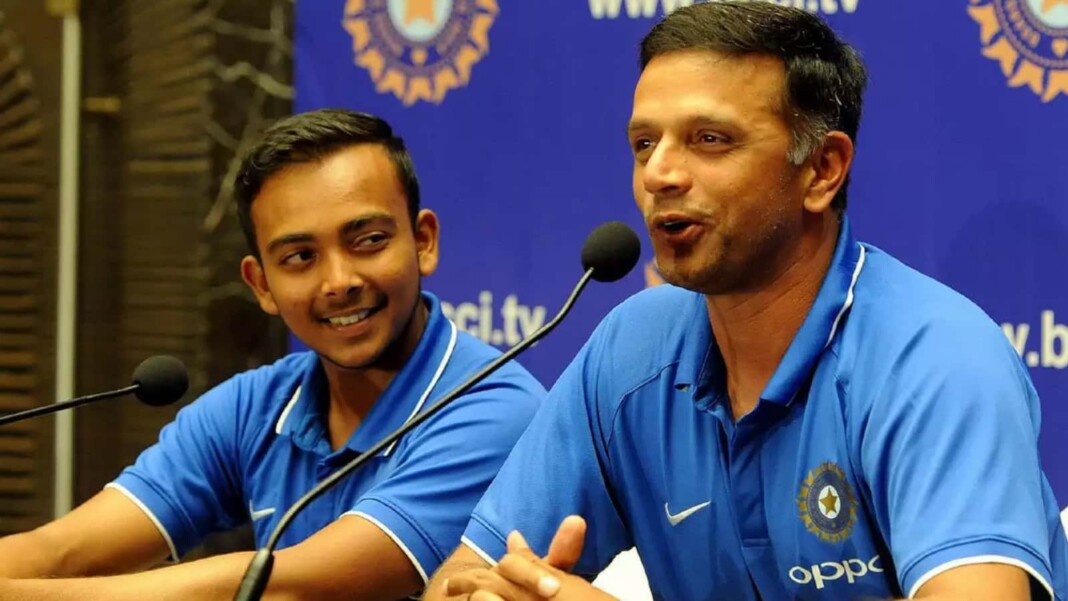 Rahul Dravid is the head coach of the Indian team that is currently touring Sri Lanka for a six-match white-ball series beginning with an ODI at the Premadasa Stadium in Colombo on July 13. After the three-match ODI series, the Shikhar Dhawan-led side will play a T20I series, beginning July 21.

“There is a different kind of enjoyment playing under Rahul Dravid sir. He was our India under-19 coach. The way he speaks, the way he shares his coaching experience, is just amazing. Whenever he talks about the game, it shows how much experience he brings to the table. He knows everything about cricket. The way he speaks on conditions and how to use them, is just out of this world,” Shaw told Indian Express on Monday.

“As Rahul Dravid sir is there, one will expect discipline in the dressing room. I’m looking ahead to the practice sessions with Rahul sir because I love to speak to him for hours. This (Sri Lanka) tour, I just have to grab the opportunity. I was desperate to get back in the Indian team. I have always kept the team above me. Be it India, Ranji Trophy team, club or my school team. I want to give my best,” said the 21-year-old Shaw.

Dashing opener Prithvi Shaw is ready to don the India jersey again as he is recalled to the national set-up for the upcoming limited-overs matches – 3 ODIs and 3 T20Is – against Sri Lanka, starting July 13 in Colombo.

The icing on the cake for the 21-year-old would be that he will reunite with Rahul Dravid. Prithvi Shaw captained India to the under-19 World Cup win in 2018 under the coaching of Rahul Dravid, who is taking the head coach’s role for the Sri Lanka series as Ravi Shastri is in England with the Test squad.

Prithvi Shaw was dropped from the national side after the Adelaide Test last year. The right-hander went back to domestic cricket to gain form and confidence – and he did it in splendid fashion with a record-breaking Vijay Hazare Trophy season where he smashed 827 runs in 8 innings at a scarcely believable average of 165.4.

He then continued this supreme run of form during the first half of the IPL 2021 – the diminutive opener whacked 308 runs at a strike rate of 166.49, storming into India’s white-ball set-up for the Sri Lanka tour. With this kind of form, Prithvi Shaw is most likely to open alongside his Delhi Capitals partner and the captain for the tour, Shikhar Dhawan. He wishes to make most of the opportunities against Sri Lanka, who are coming off a thrashing against England.

Also Read: “MS Dhoni is sleep-talking about PUBG nowadays” – Sakshi Dhoni| “Any of us would take a bullet for MS Dhoni without a second thought”: KL Rahul