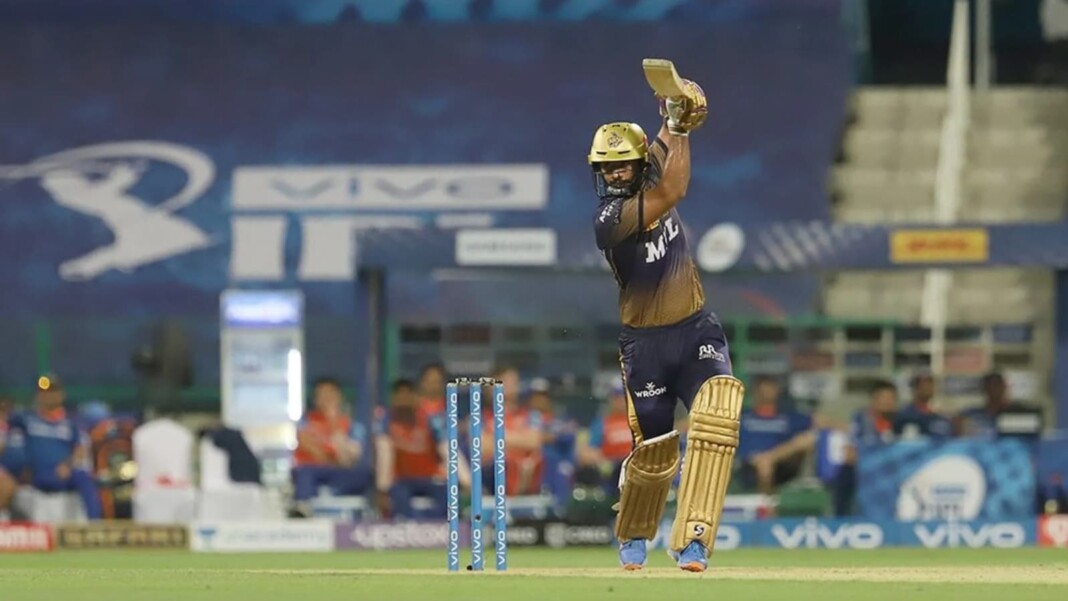 Kolkata Knight Riders (KKR) are on fire during the second phase of the 14th edition of the Indian Premier League (IPL). Playing their second match in the United Arab Emirates (UAE) against defending champions Mumbai Indians caused carnage on the match field. The Knight Riders were at their fluent best with the willow as they had to chase a target of 156 set by Mumbai Indians.

One of the highlights of KKR’s batting in the second innings was KKR’s number three batter Rahul Tripathi smashing a scintillating maximum off Jaspirt Bumrah. What made the shot more outrageous was the fact that the ball got the leading edge and was simply delivered into the stands.

On the first ball of the 12th over, Bumrah bowled his trademark delivery, a yorker. Tripathi seemed well-prepared for the ball as he shuffled across to hit a paddle-scoop. However, he mistimed and ended up with a leading edge. Instead of landing into a fielder’s hand, the ball flew over the third man to cross the boundary line.

Rahul Tripathi ends up as the highest run-scorer for KKR

It was a special shot for Tripathi as with six runs he completed his half-century in the match. Tripathi was the second KKR player to smash a fifty as the opening batter Venkatesh Iyer became the first player to hit a 50+ score for the Knight Riders in the match against the defending champions.

As far as the match is concerned, KKR easily chased 156 runs within 15.1 overs to secure a seven-wicket win. Rahul emerged as the highest run-getter with his class inning of not out 74 runs off 42 deliveries. The batter was aptly supported by Venkatesh Iyer who added 53 runs in 30 deliveries.