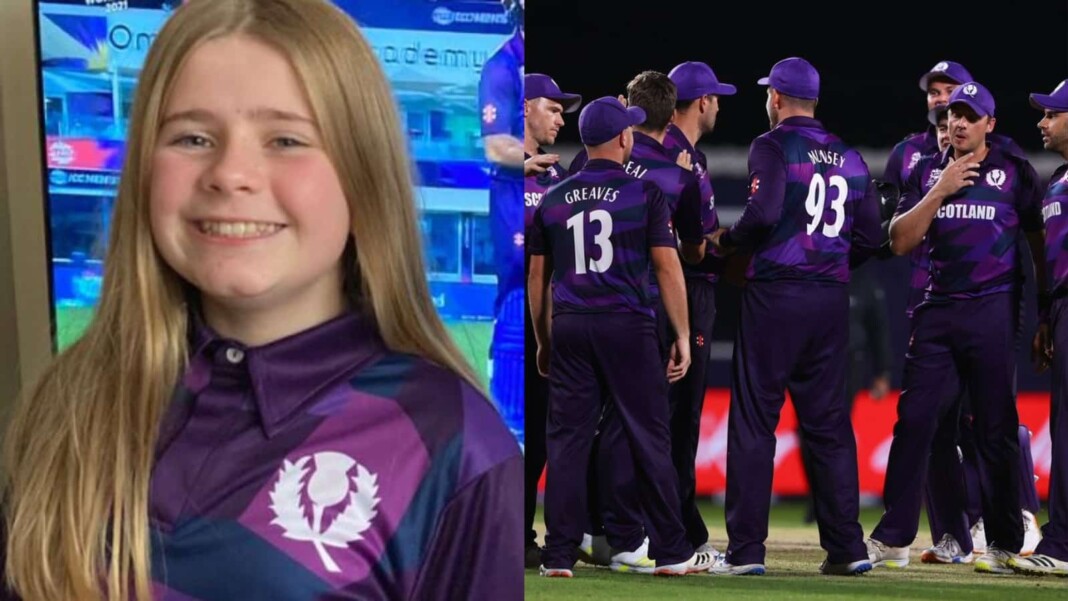 Scotland is enjoying a terrific ride in the ongoing Men’s T20 World Cup 2021. The team has delivered hair-raising performances in the group stage of the T20 competition and they are one of the prime contenders for making it to the Super 12. Apart from their on-field assaults, the Men in Purple has also become a center of attraction for their new cricket kit.

The jersey donned by the Kyle Coetzer-led side has shades of purple and black with the country’s name printed across the front in white color. The main reason behind the jersey trending on Twitter is its designer. It is learned that the Scottish jersey has been designed by a 12-year-old Rebecca Downie. She is a school-going girl and resides in Haddington with her family.

The official Twitter handle of Cricket Scotland made a special appreciation post for Rebecca. They shared a picture in which the teenage girl can be seen posing for the camera while a match featuring the Scotland team is running on the television screen behind.

“Scotland’s kit designer. 12-year-old Rebecca Downie from Haddington. She was following our first game on TV, proudly sporting the shirt she designed herself. Thank you again, Rebecca! #FollowScotland | #PurpleLids”, they wrote while sharing the picture.

Scotland leading the Group B standings

The Men in Purple and Black got off to a blistering start in the group stage of the ICC Men’s T20 World Cup. The team caused a massive upset in their first game as they defeated Bangladesh by six runs in a close encounter. Kyle Coetzer’s side invited appreciation from all over the cricket fraternity for their impressive comeback against Bangladesh.

The team followed it up with another victory over Papua New Guinea. Richie Berrington was the wrecker-in-chief for his team as he played a crucial knock of 70 runs off just 49 balls. With two victories to their credit from as many league matches, Scotland are leading the standings in Group B.