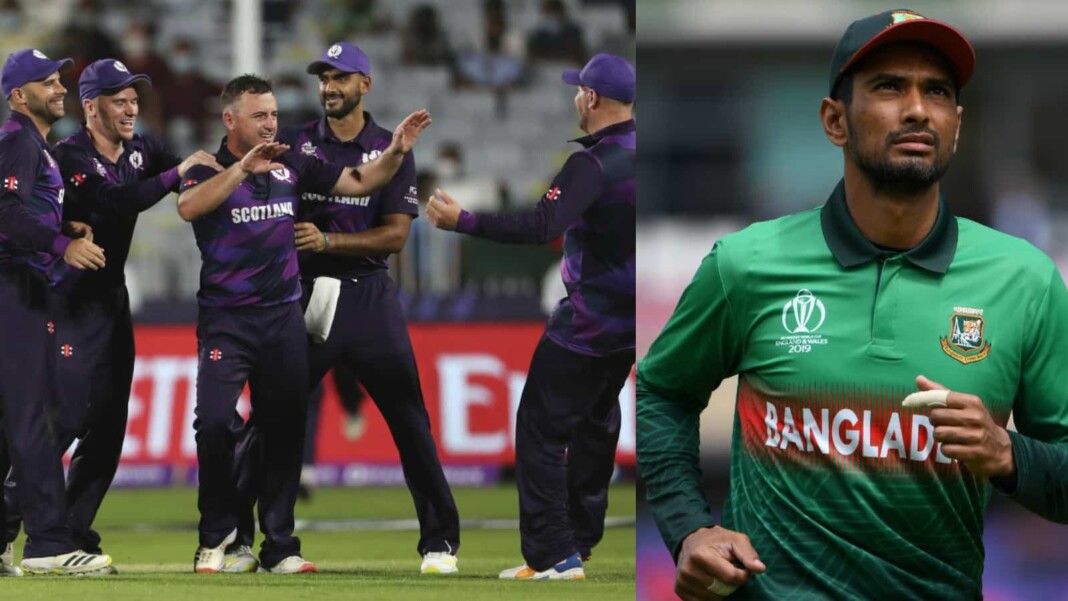 Playing their first match in the group stage of the ICC Men’s T20 World Cup 2021, Scotland caused a major upset for the favorites Bangladesh. The Kyle Coetzer-led side were phenomenal during the 20-over game as they thrashed Bangladesh by six runs. Chris Greaves was the wrecker-in-chief for Scotland as he picked two crucial wickets along with scoring a much-needed 45 runs with the willow.

After an emphatic win, Scotland took a jibe at Bangladesh skipper Mahmudullah. The Cricket Scotland official Twitter handle shared a small snippet from Mahmudullah’s press conference after the match. The clip shows the Bangladesh skipper getting interrupted during his talk with the media due to the loud noise made by the Scotland fans.

Posting the video, Cricket Scotland wrote, “Sorry we will keep it down next time.” The video drew mixed reactions from the cricket fans. While some supported Scotland and trolled Bangladesh, there were a few fans who reminded the winning team to uphold the spirit of the game.

I am very much frustrated: Mahmudullah

Meanwhile, the six-run defeat against Scotland left the Bangladesh skipper Mahmudullah frustrated and disappointed. The captain blamed the batting unit for not living up to their reputation. Bangladesh had to chase 141 runs in 20 overs but the team ended up with just 134 runs.

Speaking about the loss in the press conference, Mahmudullah added, “I am very much frustrated. Our batting is a concern. We have to bat better. We have to play aggressive cricket, regardless of the situation. We have a deep batting line-up, with Mohammad Saifuddin at No. 9. We may need to think over some changes tomorrow.”

“We didn’t deliberately bat slowly. We couldn’t hit those boundaries. We have to bat better next time. A lot of things will come up since we lost the game. I think we didn’t play well today, but we are a good T20 team. We have the capability. When we play our best cricket, we can win games,” the skipper concluded.