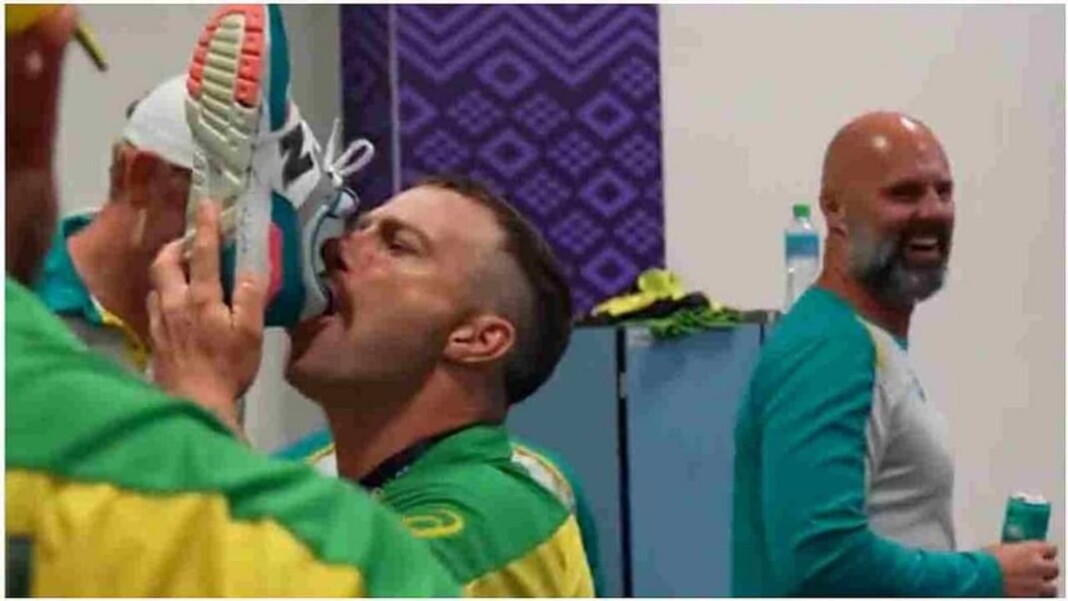 The Australian cricket team have captured the only ICC trophy left in their cabinet in the form of the 2021 T20 World Cup on Sunday. The ‘Men in Yellow’ beat New Zealand in an all Trans-Tasman rivalry final at the Dubai International Cricket Stadium, Dubai.

Aaron Finch and Co registered a one-sided triumph of eight wickets with the help of an all-round performance against the Kiwis. Soon after the game, the Aussies players including the likes of Matthew Wade and Marcus Stoinis erupted in an unusual celebration. The duo went bonkers in the dressing room to drink drinking from their shoes to mark their victory.

Notably, the popular F1 racer from Australia, Daniel Ricciardo is known for this celebration (shoes) whenever he finishes on the podium.

Here is the full video of bizarre post-match celebrations by Australia players:

Coming to the result of the game, the Australian skipper won the crucial toss and opted to field first while keeping the track record of the tournament in mind. The kangaroo bowlers provided their side with a great start as the Blackcaps scored just 32 runs at the end of the powerplay overs.

However, Kane Williamson capitalised the innings well from there with his mesmerising knock of 85 runs off just 48 deliveries. Meanwhile, he also smashed 10 class fours and 3 gigantic sixes. The 31-year-old missed out on a well-deserved ton as Josh Hazlewood claimed his wicket in the 18th over while Steve Smith completed the catch.

In the end, the New Zealanders posted a great total of 172/4 on the board at the end of their quota of 20 overs. In reply, the ‘Men in Yellow’ never let their opponents come back in the game despite losing the early wicket of their captain.

David Warner (53) and Mitchell Marsh (77*) stitched a match-winning partnership of 92 runs to take their side home in the all-important clash. This marked the maiden title victory for the Down Under side in the shortest format of the game.