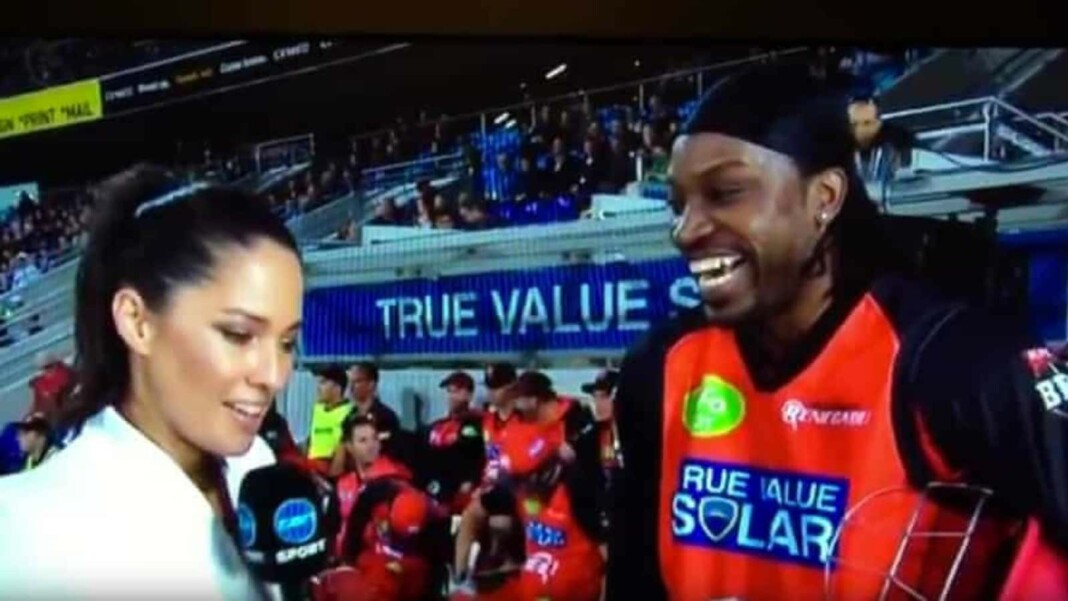 West Indies’ dynamic batter Chris Gayle has found himself becoming a part of one or the other controversy every now and then. A video is going viral on social media where Gayle can be seen flirting with a female reporter during a live interview. The incident dates back to January 2016 and took place during the 2015-16 edition of the Big Bash League in a match between Hobart Hurricanes and Melbourne Renegades.

The match between the two sides saw Hobart Hurricanes posting 140 runs on the scoreboard in their 20 overs. Daniel Christian was the top scorer for his side with a sublime knock of 58 runs off 40 deliveries. Chasing 141, Melbourne Renegades got off to a sensational start courtesy of Chris Gayle.

Opening the innings for Melbourne alongside Aaron Finch, the West Indies batter took the remand of the opposition’s bowling unit. Gayle played a quickfire knock as he accumulated 41 runs off just 15 deliveries with the help of four boundaries and three maximums. After the explosive hitter was dismissed by Cameron Boyce, he was called for a live interview by Mel McLaughlin, a reporter with the official broadcaster of the league.

As Mel was questioning Gayle for the carnage caused by him on the field, the batter crossed the line by flirting with her on camera. Gayle told the female reporter, “I wanted to come and have an interview with you as well. That’s the reason why I’m here, just to see your eyes for the first time. It’s nice so. Hopefully, we can win this game and have a drink after. Don’t blush, baby.”

The statement by Chris Gayle caught the reporter off guard but she managed the situation saying that she isn’t blushing. As the entire incident was aired lives, Gayle was subjected to a lot of trolling for his unprofessional and inappropriate behavior.