Playing their first match of IPL 2021 in the United Arab Emirates (UAE), Royal Challengers Bangalore (RCB) had a torrid outing. RCB lost the game to Kolkata Knight Riders by nine wickets after the Bangalore batters failed to put up a good show. Though RCB players fetched a lot of limelight for their poor performance, there was one Bangalore player who stole the thunder for non-cricketing reasons.

Kyle Jamieson found himself becoming the focal point of discussion in the cricket fraternity after a picture of him from the match went viral on social media. In the viral snap, Kyle can be seen smiling at a lady sitting in the RCB dugout. The picture left the fans guessing regarding the lady who was sitting in the RCB jersey in the dugout.

The viral lady is none other than RCB’s massage therapist Navnita Gautam. Royal Challengers Bangalore had scripted history in IPL 2020 by introducing a female support staff member. Notably, Navnita is the only female who is a part of an IPL franchise as their support staff.

It’s like having 20 brothers around at all times: Navnita Gautam

Navnita Gautam might be new in the Indian Premier League but she has a lot of experience under her belt when it comes to being a massage therapist. The Canada-based massage therapist previously worked with Toronto Nationals in the T20 Canada league. Gautam has also worked with the Indian Women’s basketball team during the Asia Cup.

Earlier this year, the therapist was questioned about her feelings while working closely with the men’s team. Elaborating on her experience, Navnita had said that she has no apprehensions of working with males. She had further added that gender doesn’t matter if a person is true to their work.

“Absolutely not. It’s like having 20 brothers around at all times. Slowly but surely, the transition is happening. I believe that as long as the players and support staff trust your work, gender shouldn’t be an issue as we are all healthcare professionals,” Gautam told ESPNCricinfo.

Also Read: “Dhoni’s six” MS Dhoni has a spot named after him in Sharjah due to his humongous six in IPL 2020 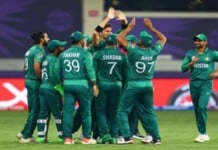