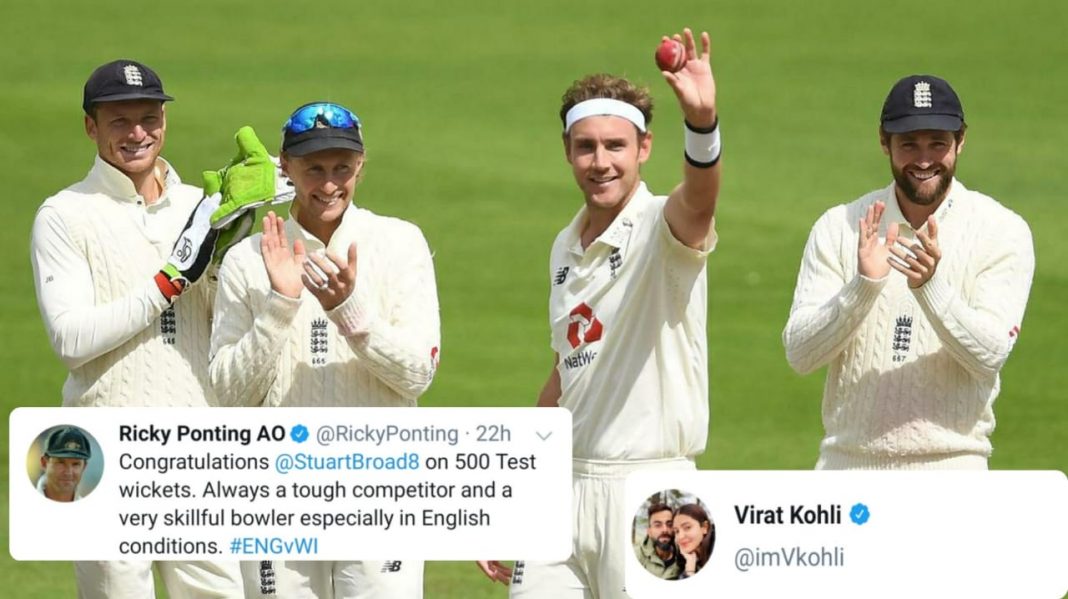 England Spearhead Stuart Broad on Tuesday achieved a glorious milestone of 500 wickets in the glorious format of the game, after he dismissed Kraigh Brathwaite in the 14th over of the Windies’ second innings.

Along with achieving his 500 wickets, Broad also became the 2nd bowler from England for the same. The pacer currently has 501 wickets from 140 Test matches and is now placed at the seventh place in the list for ‘most wickets taken’.

“Such a shame the ground can’t be full for @StuartBroad8 500th Test wickets but we are all watching in admiration of such a huge achievement. Incredible,” Paul Collingwood tweeted.

West Indian fast bowler, Courtney Walsh tweeted, “Congratulations @StuartBroad8 on reaching 500 test wits hard work does pay off. I still remember you bowling to my son at Bristol when you both were kids.. Well done and the sky is the limits next step 600.”

Other players like, Adam Gilchrist congratulate Broad and said Broad is a ‘True Champion’.

Indian master blaster tweeted, “Congratulations to England on their emphatic series win. And like I said earlier, @SturatBroad8 had a spring in his step and was out there on a mission. Congratulations also to him on picking his 500th Test wicket. Terrific achievement! #ENGvWI.”

Jayson Roy tweeted, “What a player and what a man. Incredible achievement! @StuartBroad8”

Yuvraj Singh tweeted ”I’m sure everytime I write something about @StuartBroad8, people relate to him getting hit for 6 sixes! Today I request all my fans to applaud what he has achieved! 500 test wickets is no joke-it takes hard work, dedication & determination. Broady you’re a legend! Hats off”