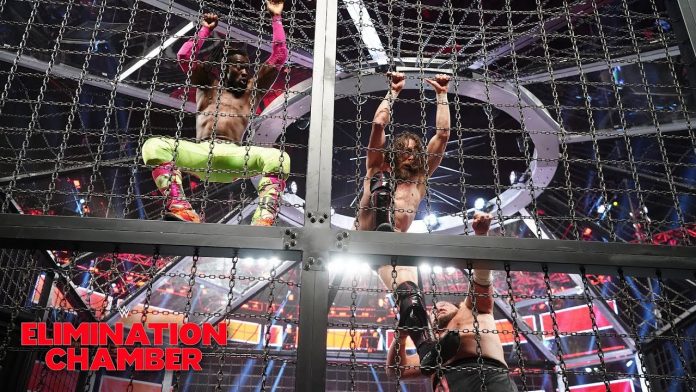 Kofi Kingston has a reputation of being a high-flying WWE Superstar. Impressive performance in a Ladder match, escaping elimination in the Royal Rumble or brutal spots in the Elimination Chamber, Kingston has done it all.

Appearing for an interview with Instinct Culture by Denise Salcedo, Kingston compared the Chamber matches to a well-known movie.

“I know what the structure is gonna look like, so, ironically, Mad Max Beyond ThunderDome, they had this steel structure where they had people in there and competing. It was very similar to the Elimination Chamber. And now here we are in what we call ThunderDome, and we’re in this structure. So, I just like you know, I always get a lot of inspiration from, you know, like movies, and you know martial arts and things of that nature. But looking at it, it’s almost like a playground for me because there’s a lot of stuff that I luckily I’m agile enough to be able to climb up pretty quickly and jump off of things. Sometimes it works out. Sometimes it doesn’t.”

Kingston feels he has an advantage inside the Elimination Chamber

Kofi Kingston will be facing five other WWE Superstars for the WWE Championship inside the Elimination Chamber. Randy Orton, Drew McIntyre, Sheamus, Jeff Hardy and AJ Styles are the other participants of the match. Kingston believes every wrestler brings something unique to the table.

“Just trying to figure out exactly how I can use the structure to my advantage because I feel like I have a little bit more of an advantage than a lot of the people that are in there now. They bring a lot of different things to the table. You know, but I bring some stuff to the table too, so we’ll see what happens what kind of meal we can make when we all come through, and we all put our ingredients in the pot. I’m sure that the WWE Universe is gonna be real pleased.”

Kingston mentioned that his high-flying abilities might provide him an edge over the other competitors. If Kingston manages to win the Championship, we might see the second version of KofiMania.