The Brooklyn Nets hosted the Philadelphia 76ers at Barclays Center, New York City but unfortunately ended up losing against Joel Embiid led 76ers as the final box score was 110-102 and Nets trailing by 8 points lost the game. The Brooklyn Nets are currently leading the eastern conference as the team holds the position of first seed since the start of the season with the record of 23 wins and 10 losses and the Philadelphia 76ers are currently ranked as the 6th seed in the eastern conference with the record of 19 wins and 16 losses.

The rivalry between the two teams and their respective stars has history to deal with which resulted in some heated exchange between Kevin Durant and Joel Embiid in their latest match-up. The Brooklyn Nets and Philadelphia 76ers have faced each other 4 times so far this season and are tied for 2-2 wins each. The altercation between Kevin Durant and Joel Embiid in the latest matchup is a result of Brooklyn Nets and Philadelphia 76ers’ last match-up some weeks prior where Kevin Durant led Nets to victory against the Philadelphia 76ers who were shorthanded due to COVID-19 health and safety protocols and as the final whistle was blown, Kevin Durant was seen shouting “Get this sh*t out of here” to the 76ers.

Joel Embiid and Kevin Durant went against each other in this close contested, head to head match-up. Kevin Durant in his return after 2 weeks in COVID-19 health and safety protocols dropped 33 points, 4 assists and 6 rebounds and Joel Embiid coming up big in the second half dropped 34 points, 7 rebounds and 1 assist while hitting the game winning shot and signing the win deal for Philadelphia 76ers.

The Altercation between Joel Embiid and Kevin Durant

Joel Embiid hitting a dagger under the rim on Lamarcus Aldridge and Claxton with 15.3 seconds remaining for the final whistle to end the game celebrated a bit by jumping around and showing his emotions for this hard-earned lead which further resulted in a win. As Joel Embiid got 2 free throws since he was fouled by Lamarcus Aldridge and was then ahead with a 8 point lead which the Nets were unsuccessful in chasing as the 76ers stepped up big time in the final moments where the game was seen in the pocket of Kevin Durant led Nets.

Meanwhile before the free throws watching Joel end it for Nets and celebrate, Kevin Durant not being that happy went straight to Joel on the line and criticized him which led the referee’s to gift both of them with a Technical foul each but still both the stars didn’t stop jawing at each other. After the game ended Joel Embiid not loosing his opportunity gave Kevin Durant a taste of his own tea remembering what Kevin Durant did in the last match-up, Joel said “Go Home” to the whole Nets team in their face while showing them the way out using his hands.

Kevin Durant didn’t really meet and greet anyone from the Philadelphia 76ers but while leaving the court showed big thumbs up to Joel Embiid and said “Well played” and Joel standing near the mid court did the same and then both the stars headed back to their locker rooms. In the postgame interview Kevin Durant and Joel Embiid both showed respect to each other and mutually agreed on the altercation being part of the game.

Also Read: “Pick a side but don’t straddle the fence”: Draymond Green criticizes… 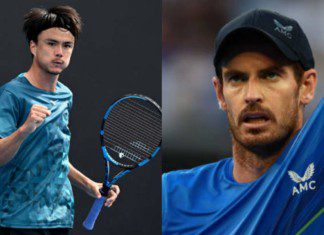 Lakshya Chopra - January 20, 2022
Andy Murray's quest to do well at the 2022 Australian Open comes to a halt in the second round on Thursday. Japanese qualifier beats...