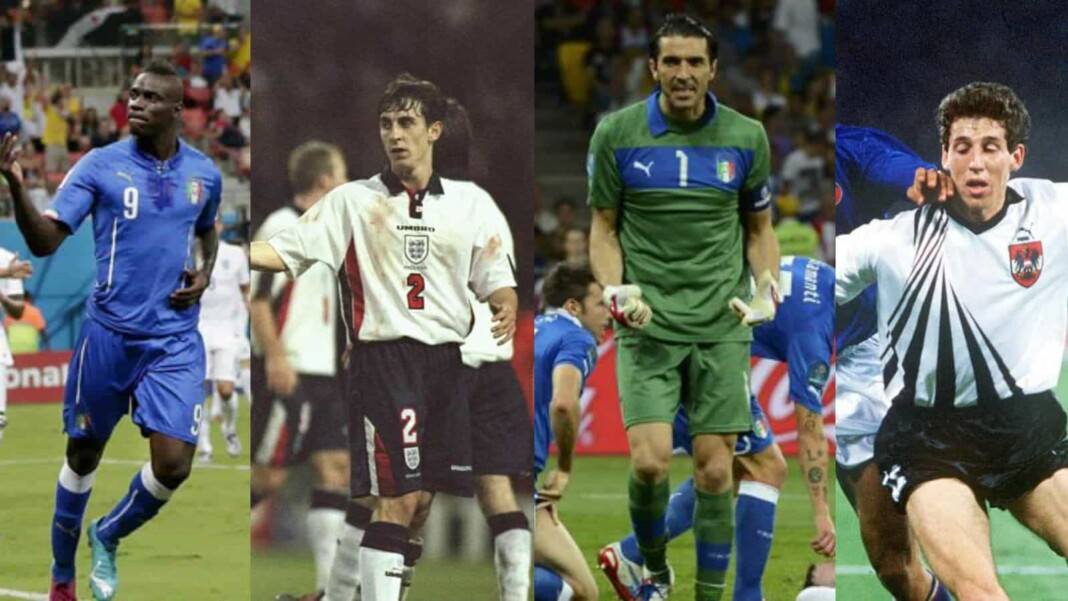 Euro 2020 has reached the business end. England and Italy have reached Wembley to play out the finals on Sunday. Ahead of the England vs Italy game, the teams are looking to strategize and finalize the fine details. England are heading to the game without any injuries whereas Italy have an important player out of the game. Spinazzola is out for the game after he suffered a horrific injury ahead of the semifinals.

Gareth Southgate is one of those people from the England national team who is on the verge of getting a Knighthood. Despite the slow start, England have carved their way out to the finals. On the other hand, Italy have put their World Cup 2018 disappointment behind and are looking to clinch the Euro 2020.

Ahead of the England vs Italy finals, here are our compilations on the top five games played between the sides on the major international stage.

It was a Group D fixture in the FIFA World Cup with Italy going head to head against England at Arena Amazonia. Both teams involved in an end-to-end action and still the scoreboard was unchanged till the half hour mark. However, Marchisio opened the scoring for Italy only to be equalized by Daniel Sturridge. Both teams went into half-time with 1-1 scoreline.

In the second half, Italy came all-guns-blazing and it took them only five minutes to establish the lead again. He scored a header for Italy and the defensive vulnerability caught England. In an entertaining game, the Azzuris registered a famous victory in the World Cup.

It was one of those games between England and Italy which ended up in heartbreak for the Three Lions. In the regulation time, the game ended 0-0 forcing the tie to extra-time. Even in the extra time, England failed to get past the resilient Italian side that resulted in the penalties. In the extra time, Italy came close to break the deadlock with a header but Joe Hart saved it.

For England, Steve Gerrard and Wayne Rooney slotted in the ball perfectly whereas Ashley Young and Ashley Cole disappointed the side. On the other hand, Mario Balotelli, Andrea Pirlo, Riccardo Montolivo and Alessandro Diamanti scored it past Joe Hart to deny England the spot in the next round.

It was an important game was at Rome that could decide who would go to France to play the World Cup 1998. England needed a draw whereas Italy needed a win. The losers of the game would qualify for the play-off stage of the tournament.

England were professional throughout the game and put a decent shift in the defense and midfield keeping the Italians at bay. Angelo di Livio was sent off which hindered Italy from playing the all-out attack game against Three Lions at Stadio Olimpico. Paul Gascoigne’s bloodied face was an eye-catching event during the tournament.

Former England gaffer, Glenn Hoodle had not tasted a defeat in an international circuit unitl he faced Italy in the World Cup qualifiers held at Wembley. Matthew Le Tissier, one of the English greats, started the game after two years was one of the players who partly decided the outcome of the game. He missed a lot of chances that cost them the game. Italy were clincial in front of the goal at Wembley.

Gianfranco Zola, the former Chelsea forward scored for Azzuris that helped Italy to take all three points home. However, it was England that played the finals of FIFA WC Qualifying rounds.

This is one of the reasons why fans hate England vs Italy in a major international tournament. England lost the semifinals and faced Italy in the third-place play-off game. England’s David Platt equalized after Roberto Baggio found the back of the net for Italy in the second half of the game.

When it seemed like the game is going to an extra time, Paul Parker conceded a penalty that dampened England’s chances to finish their 1990 campaign with a win. Toto Schillaci converted the penalty, helping Italy to win 2-1 at Stadio San Nicola.

Who will in the England vs Italy at Wembley in 2021? Will England come over Italy in Euro 2020 or Mancini’s team will continue their dominant run?