BGMI fans were eagerly waiting for Krafton to announce the Spiderman collaboration in BGMI as a similar crossover was announced in PUBG Mobile few days ago. The major partnerships go hand in hand in both the games, although, the late announcement by Krafton always keeps the players on their toes. Currently, players are enjoying the crossover with Arcane which was brought simultaneously with the 1.7 update of the game and it is being speculated that BGMI x Spiderman No Way Home collaboration will be released with the 1.8 update.

Players have seen a pile of collaborations announced one by one on Battlegrounds Mobile India. From partnering with Baby Shark to Koeniggsegg, Krafton is making sure that they live up to the hype created by the players. Similarly, fans are also benefitting from these partnerships as they are able to claim free rewards. Players were taken aback by the latest teaser at the official Instagram handle of Battlegrounds Mobile India:

Read More: How to get free weapon skins and outfits in BGMI for December 2021?

A similar announcement was made in PUBG Mobile when Tencent teased the crossover. Players quickly realised that their favourite Marvel super hero is swinging its way to the battlegrounds. The announcement of BGMI x Spiderman No Way Home collaboration comes a day before the American movie is released globally in the theatres.

Although, Krafton has refrained from revealing much details regarding the collaboration but the series of revelations from PUBG Mobile suggest that players will be able to claim a free Spider Man graffiti during the collaboration’s pre heat event. The date of this major crossover has not been announced yet but players can expect a major event soon in the game once the Arcane crossover is concluded. Some leaks suggest that BGMI x Spiderman No Way Home collaboration will bring a Spiderman themed mode in the game, however, this news should be taken as a pinch of salt.

The exclusive Spider Man graffiti is already available in the in game shop which will be available till 30th December. BGMI is also conducting winter festival based events which is giving away permanent winter outfits to the players. 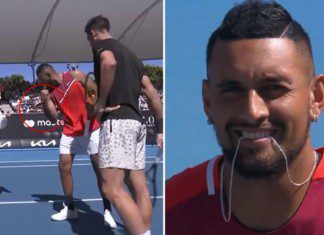 Nirmit Mehta - January 24, 2022
Nick Kyrgios is has made a reputation of being one of the top entertainers on court. The Australian shows a very casual attitude on...