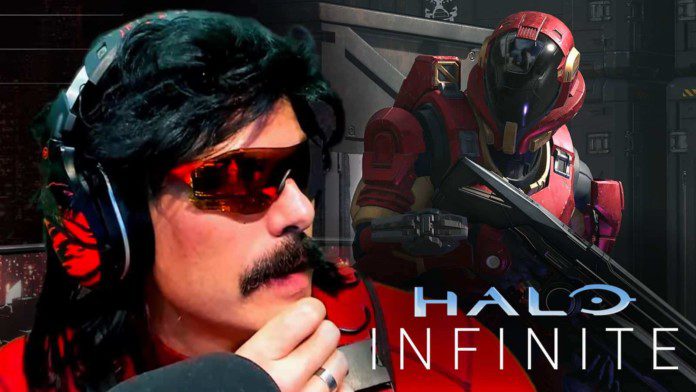 Dr Disrespect hasn’t given up hope 343 Industries is secretly working on a Halo Infinite battle royale, claiming the game “must” add the modern mode to its playlists early in 2022 or risk falling out of favor entirely ⁠— and he’s even willing to work on it himself to make sure it gets made.

The two-time has been loving Halo⁠— a lot more than Warzone, at least ⁠— but YouTube’s spectacled streamer is concerned. He believes without following the path set by Apex Legends, Warzone, and Fortnite, it will eventually die.The long-awaited Halo sequel launched in the early weeks of December and immediately won Dr Disrespect over.

He claimed the title was a return to gaming of old, and praised 343 for their arena designs. And yet, he still has one thing on his mind: a Halo Infinite battle royale .That’s it… that’s what it needs,” he claimed.“The people saying Halo doesn’t need a battle royale said Battlefield didn’t need one. Now look at where that game is,” he laughed. “You have to have one.”

Imagine the design of a battle royale in Halo,” the two-time continued. “Think about all the Halo maps, how they could fit together into one battlefield. Big Team Battle maps would just be the Superstore area of a battle royale map in the game.“Lord. Think about the space that you’d be jumping into, you’ll fight in. You could fly through it. Halo has always had a nice big ring.

Start the game in a spacecraft, land on the ring. Close in that circle on either end. It’s all right there. Dr Disrespect was so excited, he started describing all the ways the devs could design a Halo-flavored battle royale map, and even offered to help build the game. “Think about all the multiplayer maps from all the way back in the original Halo to now, in Infinite playlists

Not just the layouts of maps, but the fictions of all these famous maps too. The stories there are just so rich. Then put all these maps together, combine them on a massive scale

Also Read: GTA V Was the Most-Watched Game on Twitch in 2021

Nirmit Mehta - January 12, 2022
Novak Djokovic declared that he had tested positive for a RT-PCR test he took on December 16, 2020. The Serbian revealed that just a...