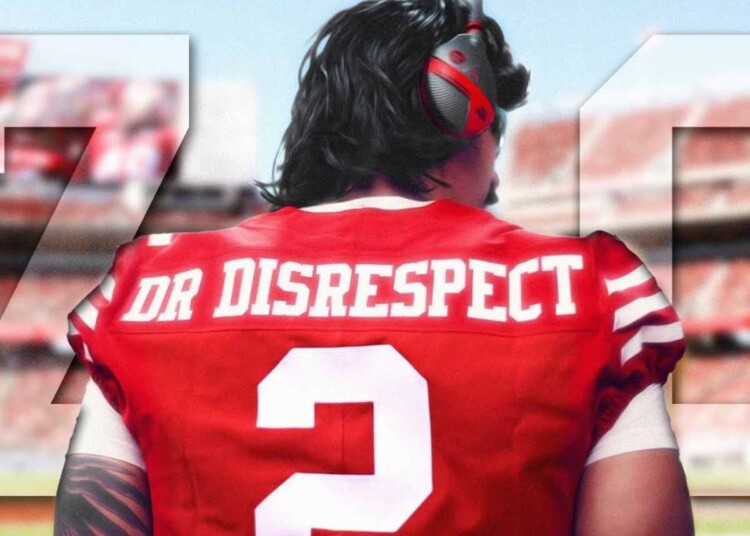 NFL just concluded its wild card matches weekend and saw an enthralling competition between the chosen teams. One of the matches i.e. San Francisco 49ers vs Seattle Seahawks had a very unexpected guest, as American internet personality Dr DisRespect decided to attend the match to cheer for his favorite team.

Keeping his streaming persona intact, the Two-Time was seen playing the role of the pre-game hype man, before the two teams took against each other. Dr DisRespect attended the match donned in a jersey of 49ers and urged the ‘faithful’ fans of the team to cheer for the players loudly. He also cheered for 49ers in ‘The Doc’ style, leaving NFL fans both confused and amazed at the situation.

“Let’s make some noise”, the streamer exclaimed in excitement, quite effectively playing the role chosen by him. Eventually he blew the horn to mark the beginning of the match between 49ers vs Seattle Seahawks. Fortunately for the streamer, his favored team managed to clinch the victory even after keeping an average performance at the first half.

While NFL fans were celebrating in joy for witnessing such a spectacular match, they were also left scratching their heads after seeing Dr DisRespect cheering loudly for 49ers. On the other hand, The Doc’s fans were over the moon to witness their favorite streamer ditching streaming for a day and attending the NFL playoff match.

Dr DisRespect is an avid fan of the San Francisco 49ers

A basketball player in his college days, Herschel Beahm chose to become a streamer in his career and has never looked back since. He has proven to be splendid at his job as he was responsible for making FPS games prominent in the industry. One of the biggest Call of Duty streamers till date, also has a passion beside gaming.

He closely follows US sports as one will occasionally find him cheering for the Golden State Warriors at NBA as well as the San Francisco 49ers. The renowned streamer did not go unnoticed when he attended these matches, as the concerned members of the team who he cheers for, are always ahead to invite him at their training camp or provide a shoutout to him.

Surprisingly the YouTube Gaming streamer does not restrict himself to the audience seat as once, he turned out to be a showstopper at the 49ers training camp, after hitting an impressing 60-yard throw. In addition to that, he has also interacted with some notable 49ers players such as George Kittle, even hinting at a possible collaboration.

Dr DisRespect has been a loyal fan to the 49ers as his viewers will find him defending his team in front of his fellow streamers such as TimTheTatman, who supports Dallas Cowboys.

As the official Twitter account of 49ers shared a clip of Dr DisRespect blowing the horn before the match started, NFL fans flooded the comment section for expressing that they were bewildered at the situation. Here are some noteworthy comments-

On the other hand, The Doc’s went gaga over the streamer’s appearance and commented that this is only the starting as 49ers should prepare for more such visits by the streamer.