Minecraft has received some great updates last year and much more has been scheduled for this year as well. Here are the top 5 best seeds for Minecraft 1.18 in 2022 that will be sure to greet them with the new features!

Minecraft 1.18 or better known as the Minecraft Caves and Cliffs update, has been one of the most major upgrades to the game in a long time. This update took place to beautify and add, to the Caves and the mountains of the game. Naturally this added many new mobs, biomes and structures to the game that are completely exclusive to this update.

Here are some seeds for Minecraft 1.18 in 2022 that will give you the best Saves and Cliffs experience.

This is the Lush Cave biome that has been released in the game in the Minecraft 1.18 update. The Lush Caves feature ample vegetation along with azalea flowers and vines, and naturally lightened by Glow Berries.

This seed features a great exposed Lush Cave biome on the side of a Mountain system surrounded by ponds and caverns.

This one also features a Lush Cave biome, but it is surrounded by a coral ocean and a Badlands biome. Players will find ample to discover with mines and also the double layered Lush Caves on the side of a cliff.

This lets the players spawn in a relatively safe zone in the lower slopes of a mountain range. The snowy mountain range features the newly introduced snowy plateaus and can spawn Goats as well! The players will spawn safely near a village and get a great start in the game.

This is the perfect mountain range to explore after the additional of jagged peaks and steeper slopes for the mountain biomes. The Caves and Cliffs Part 2 update released the mountain and caves biomes and this one has one of the highest peaks in the game. The height level for the game has also been increased so it will be a challenge to scale!

The Dripstone Cave biome is a fan-favourite among the biomes released in the update. This seed features a large exposed Dripstone Caves that merges with a large ravine. This is a great seed to explore and can be found close to the spawn point.

Who are the winners of Minecraft Championship 21 (MCC)? 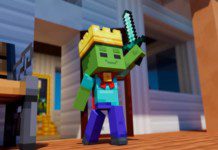