Gaming saw a huge trend this year with record breaking revenues, humongous prize pools for eSports titles and celebrities joining eSports organisations. In some aspects, PC games stood out compared to mobile games. Here we look at best PC games that were released this year.

Every year, gaming aficionados wait ardently for the best developers to release new titles as a gamer always seeks to explore new options and conquer every virtual game. The current year saw some exciting games getting released for the PC platform, some of which, outdid their former genres. If you’re someone who considers himself an avid gamer, then you’ve landed to the right place as this article will mention the best PC games of 2021.

The game saw an early December release this year. If you’re into horror genre then this video game is just made for you. Also known as Dying Light 2 Stay Human, players will be sent into an open world where they need to survive in a zombie apocalyptic world. What makes this game more special than the original version is that players can explore a much larger map use the swift movements of their character.

Read More: How to get the Dahl FIFA 22 Wildcard Token in the Marquee Matchups FIFA 22?

With the release of Hitman 3, IO Interactive completed the trilogy of the World of Assassination. The winner of ‘PC Game of the Year’ at Golden Joystick Awards, Hitman 3 follows the original story line where players assume the role of Agent 47 who travels in different locations carrying assassinations. Players will have access to more locations in this new game.

The sixth installation to the Far Cry series, the game after receiving mixed responses got nominated at Game Awards 2021. The action adventure game will take the players to the Carribean island where they need to assume the role of  role of guerilla fighter Dani Rojas to defeat the dictator’s regime. Players can use a set of advanced weapons to defeat their enemies.

Although, the game’s full version has not been released as of it, its early access in the month of February this year broke the internet. The game is based on Norse mythology where players assuming the role of fallen Vikings need to defeat all the bosses situated in five different biomes. The game takes the players back to Ancient world where they need to use swords or arrows and travel other biomes on foot or ships.

One of the best PC games released this year is undoubtedly, Deathloop. The first person shooter game will require the players to defeat eight targets before midnight if they wish to escape from the time loop. Failing which, the time span will begin again and they need to start over. Players can also assume the alternate role of Julianna and take the main character out of the time loop. 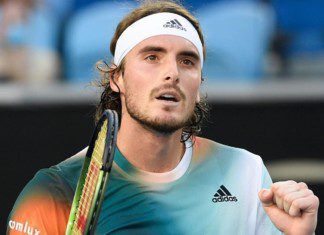 Nirmit Mehta - January 28, 2022
Stefanos Tsitsipas faced his third Australian Open semifinals defeat, as he was defeated by Daniil Medvedev in straight sets on Friday. This is the...