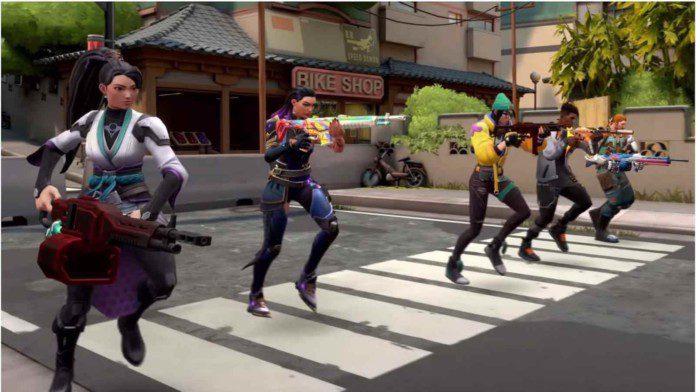 The Episode 4 Act 1 Battle Pass features three new weapon skin lines, Hydropdip, Schema and Velocity, for Valorant players, along with a plethora of gun buddies, sprays and player cards. Among the three weapon skins, the community feedback surrounding the Schema skin is that it can very well do with “alternate colors”.

Valorant weapon cosmetic skins are trendy among the competitive shooter’s faithful fans. Many consider Riot’s proficiency with the skins to be standard among other such games and their developers. The recently released Episode 4 Act 1 of the game has arrived with a massive amount of content: the new Battle Pass.

A Reddit post by u/Eevietalks has started a conversation regarding the Schema skin line available to players who purchase the Episode 4 Act 1 Battle Pass. The weapon skin is available for four weapons – Stinger, Sheriff, Odin and Vandal.

Gathering from the replies underneath this post, the community, in general, is looking for variations to the popular Schema skin. A_RandomNerd commented:

“The entire community agrees. That’s something I have heard from a lot of different people now, where everyone feels like Schema skin variants would be a great addition to the game.”

Several replies talk about how great the Battle Pass looks this time around, with all the weapon skins clicking with the players along with the Karambit skin. The only issue is that Riot only provides variants for one of the skins in a Battle Pass, according to A_RandomNerd. This time around, the Velocity skin line has received color variants.

Episode 4 Disruption Act 1 has started a new chapter in Valorant, both with the overarching narrative of the lore and the addition of a new agent to the mix. The update also brought players the premier new UE skin Protocol 781-A to purchase and enjoy.

Pokimane Reacts to fans hating Dream: “Oh, someone said. I need to get my Dream hater voice on.”

xQc submits request for name change on twitch after , Will we see the sad collapse of Mr. Cow?

“Let’s not look for similarity” Paula Badosa asks for comparisons to...