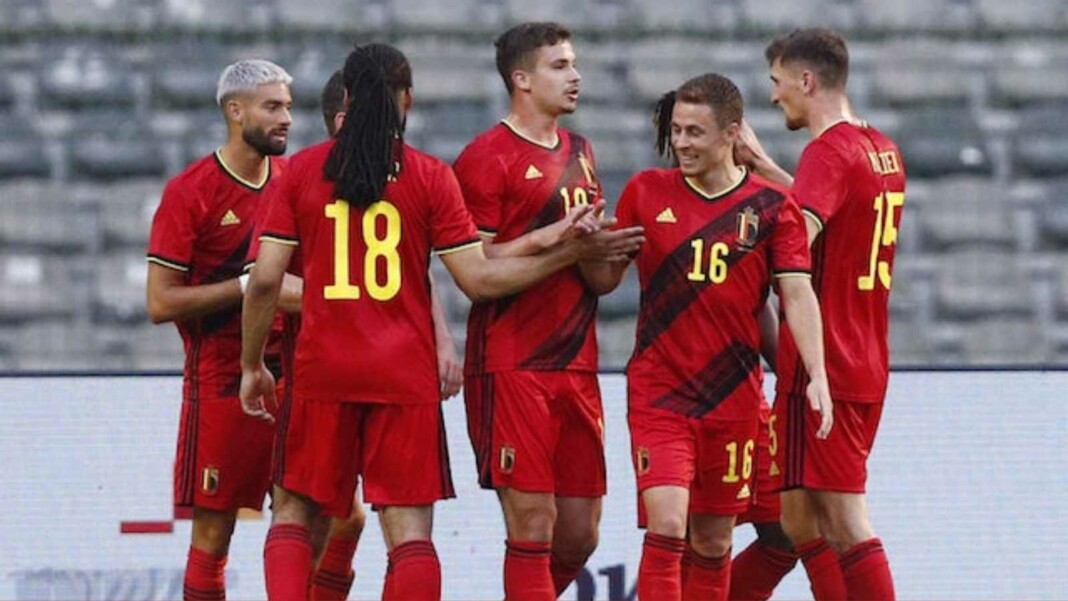 It was all Belgium in the Group B encounter as the side cruised to a 3-0 victory over Russia who struggled for consistency since their impressive run in the 2018 FIFA World Cup. Romelu Lukaku was the player in the match with 2 goals to his name while Thomas Munier scored the other. Belgium was in total control of the match and this is only to get better as the tournament progresses.

On the other Russia was full of individual mistakes which led to the opening two goals. To qualify for the next rounds, the team needs to find some sort of rhythm and the top performers should be at their best. No one in the team looked in shape apart from Artem Dzyuba who seemed to be a loner on top of the field. Here are Belgium vs Russia player ratings:

Thibaut Courtois (7/10) – The experienced goalkeeper did not have to much work as Russia rarely threatened the Begian goal but was up to the mark when called upon.

Toby Alderweireld (8/10) – Was a rock at the back in his attempt to stop a big striker like Dzyuba. Did not put a foot wrong during the whole of 90 minutes.

Dedryck Boyata (8/10) – The ventre back controlled the game from the centre of the defence line. He was the player to make some superb tackles at the back not allowing the Russian forwards to have serious attempts on goal.

Jan Vertonghen (7/10) – Looked very good on the ball without any defensive errors which could have let to goal threats. Did not play the full game though as was subbed with 20 minutes left to play.

Timothy Castagne (5/10) – Was doing well until was forced to leave the field until the head injury on the 27 minute mark.

Leander Dendoncker (6/10) – Had a good time breaking up play in the midfield but was not impressive with his passing and shots. Could have been more impactful going forward.

Youri Tielemans (6/10) – Did not create enough opportunities and could not make most of his attacking talent that he is known for. But was in control the game and kept good possession for his nation.

Thorgan Hazard (7/10) – Playing in a left-wing-back role, the 28-year-old showed signs of his talismanic brother. His cross led to the second goal scored by Thomas Munier.

Yannick Carrasco (5/10) – Lots of wasted opportunities featuring some solo efforts leading to nothing. Lost possession of the ball on occasions. Threatened in bits and pieces.

Dries Mertens (6/10) – Nowhere near his top form, but still his ball managed to find Romelu Lukaku for the first goal, courtesy to a Russian defender.

Romelu Lukaku (9/10) – Absolutely a beast in the first half, taking his chance well for to open the scoring. Wasn’t as prominent after the break, but the second goal was a sign of his brilliant form and confidence.

Eden Hazard (5/10) – Came on as a substitute. Could not really produce anything but some game time would help his cause of making the starting line up in the deeper stages of the competition.

Thomas Vermaelen (5/10) – Again a player coming off the bench and did nothing wrong to the game.

Dennis Praet (6/10) – The central midfielder bagged some minutes as a substitute and looked confident. But was not relly a difference maker.

Anton Shunin (3/10) – Didn’t make any notable saves for his team. It was his inability to keep hold of the Thorgan Hazard cross that led to the second goal. beaten on his near post by Lukaku for the third.

Andrey Semenov (5/10) – Made a horribe error for the first goal and was punished by Lukaku. No prominent mistake barring that but made it easier for belgium to open up the game.

Georgiy Dzhikiya (7/10) – The defender in the Russian team who is not to blame for any of the goals and made a couple of very good tackles in their opening game.

Yuri Zhirkov (4/10) – With age not on his side found it a tough to cope up with the belgian attack and was ultimately substituted in the first half.

Dmitriy Barinov (4/10) – Had a poor game in the midfield in an attempt to control the same. Was taken off at half time by the gaffer.

Magomed Ozdoev (5/10) – Found himself lost in the midfield when tested against a far better central pairing.

Roman Zobnin (5/10) – Saw a lot of the ball but did not live up to the expectation of creating chances for his side. Lasted only 63 minutes on the field.

Aleksandr Golovin (5/10) – Nothing to praise apart from a couple of decent set pieces. He needs to deliver if Russia are to qualify to the knockout stages.

Artem Dzyuba (7/10) – Was the only man trying hard for his team. Fought hard, Kept battling, but couldn’t do anything up against the highly experienced defenders on duty last night.

Denis Cheryshev (3/10) – Came on for Kuzyaev, failed to perform, and looked out of focus. Was again subbed off in the 63rd minute.

Igor Diveev (4/10) – A substitute with not much scope of damage control.

Maksim Mukhin (5/10) – Had a poor outing as he did not get to do against a side that looked confident and in control from the start.

Aleksey Miranchuk (4/10) – Came off the bench and tried a few things but nothing significant to trouble the opponent.