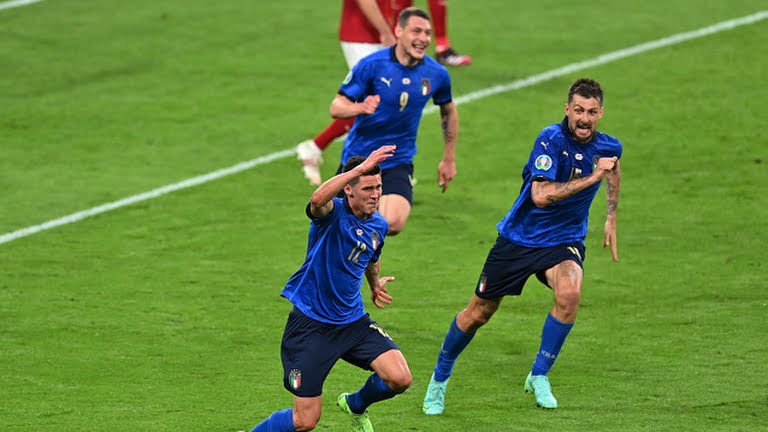 The Italy versus Austria Euro 2020 round of 16 game is underway at the Wembley in London, with both teams unwilling to yield each other even an inch of grass, with a quarter final berth up for the grabs.

The game has been a live wire from the first minute, with both the teams matching each other step for step in every second of the game. Austria though a bit under supplied talent and quality wise, has given a tough fight to the Azzurris throughout the match, with the match unable to be decided within normal time.

Federico Chiesa, son of former Italy icon Enrico Chiesa, has added the extra bit to the Italian team since he came on at the 84th minute. The Juventus man has been a live wire since, constantly troubling the Austrian defence with his burst of speed and neat breaching of the opposition’s defensive lines.

Chiesa has been rightly awarded with a goal in the 96th minute after all the hard work he put in since coming on. Spinazzola’s pass caught out Lainer, as he put in nicely for Chiesa who takes two nice touches to set it rightly for himself, before volleying it finely into the far corner to give Italy the much needed lead.

Matteo Pessina, the other substitute, doubled the lead within 10 minutes, which resulted from more of an Austrian mistake. Acerbi slips in the penalty box, but the Austrians fail to clear the ball as the Lazio defender pushes it to Pessina who is rather unmarked, as he fires a good shot to the far corner, much beyond the reach of Bachmann, to score his second goal of the tournament and give Italy a massive foothold in the Quarters.

The game has still another fifteen minutes to play but Italy are looking comfortably through to the Last 8 untill Austria pull out a miracle.