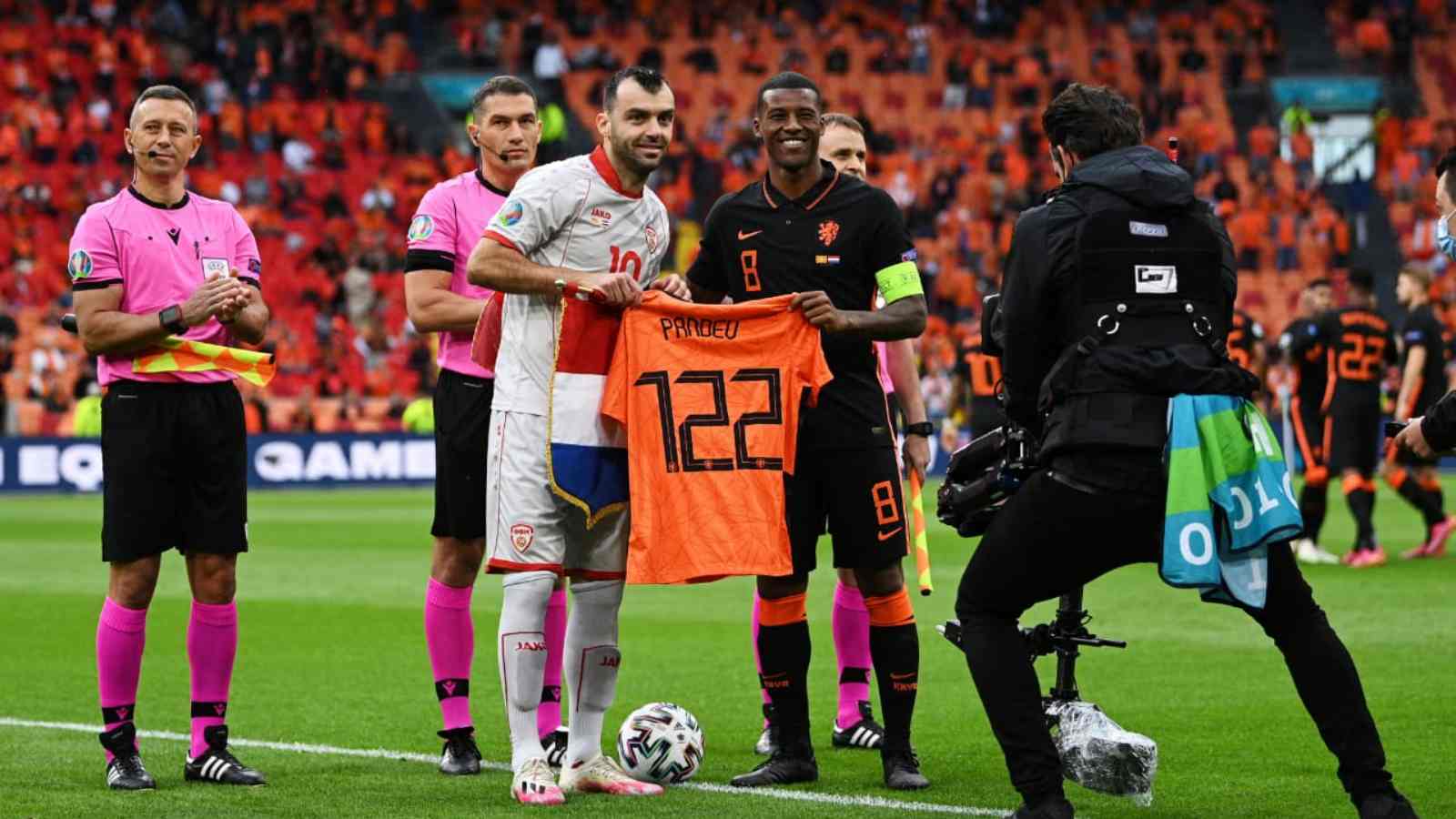 The Netherlands are well and truly back on the bigger stages of World football and have shown their authority by maintaining a hundred percent record in the group stages of EURO 2020. A wonderful display of attacking football in a match which was not really relevant for the Dutch showed their hunger and desire in their side.

Memphis Depay scored a goal and set-up another one for Gini Wijnaldum as the Dutch captain grabbed a brace for himself in what was a night full of celebration at the Johan Cruyff Arena in Amsterdam.

Here are our player ratings for the EURO 2020 match played between North Macedonia and Netherlands.

Dimitrievski- 7/10- Pulled off a string of saves and kept the scoreline respectable for North Macedonia. Made a save in Netherlands’ third goal but could not have done anything in the follow-up.

Ristovski- 6.5/10- Van Aanholt had the measure of the left-back who often failed to cope up with his counterpart’s pace.

Velkovski- 6/10- The defender failed to stop Depay and Malen as they found it very easy in front of goal.

Musliu- 6.5/10- Was comparatively better than his defensive partner, but failed to control Gini Wijnaldum’s runs from midfield into the box.

Elmas- 6.5/10- The creative midfielder found it hard going in a match where his side saw very little of the ball and was largely seen in a defensive role.

Ademi- 6.5/10- The defensive midfielder wasn’t effect in his position and was overrun on occasions by the Dutch midfielders, who reacted to situations better than him.

Tricovski- 6.5/10- The captain was subbed off the pitch after a largely ineffective display like the other players.

Bardhi- 7/10- Played out a decent match and delivered few good crosses into the box, which the strikers failed to get hold of.

Alioski- 7/10- The defender kept Denzel Dumfries quiet for large parts of the game and was probably North Macedonia’s best player throughout the match. Received a yellow card late on for frustration.

Trajkovski- 6/10- Struck the post with a vicious shot in the first half, but except that effort did not have a good day on the pitch.

Pandev- 6/10- The veteran strike could not influence the match, as he would have liked to in his final appearance for the National side.

Stekelenburg- 7/10 – The goalkeeper did not have much to throughout the match but pulled off a crucial save in the match, a decent performance from him.

De Vrij- 7/10- Was largely untroubled like the other Dutch defenders but helped them build smoothly from the back as part of Frank De Boer’s tactics.

De Ligt- 8/10- Played an excellent game and was often seen very high up the pitch as the Dutch did not have much to do defensively.

Blind- 8/10- Another great performance from the experienced man at the heart of Netherlands’ defence and was good on the ball as well often whiffing out danger outside the box.

Dumfries- 6.5/10- The winger did not have that much influence on the game as his previous matches but was decent throughout, will be player to look out for in the knockouts.

Gravenberch- 7.5/10- The midfielder alongside his partner enabled controlled for the Dutch and was instrumental in their attacking play as well, creating moves from his deep lying position.

Frenkie De Jong- 8/10- The Barcelona midfielder showed yet again why he is one of the best in what he does and played out a near perfect game for the Dutch.

Wijnaldum- 9/10- A captain’s performance and scored a brace, making in behind runs which the North Macedonian’s could not catch up with.

Van Aanholt- 7.5/10- The winger was ruthless going forward and made a number of moves for the Dutch.

Malen- 8/10- A decent performance and provided the assist for Depay’s goal, linking up well with his strike partner throughout the match.

Depay- 9/10- The new Barcelona striker, displayed all of his flair and opened the scoring for the Netherlands and also set up Wijnaldum’s first goal.