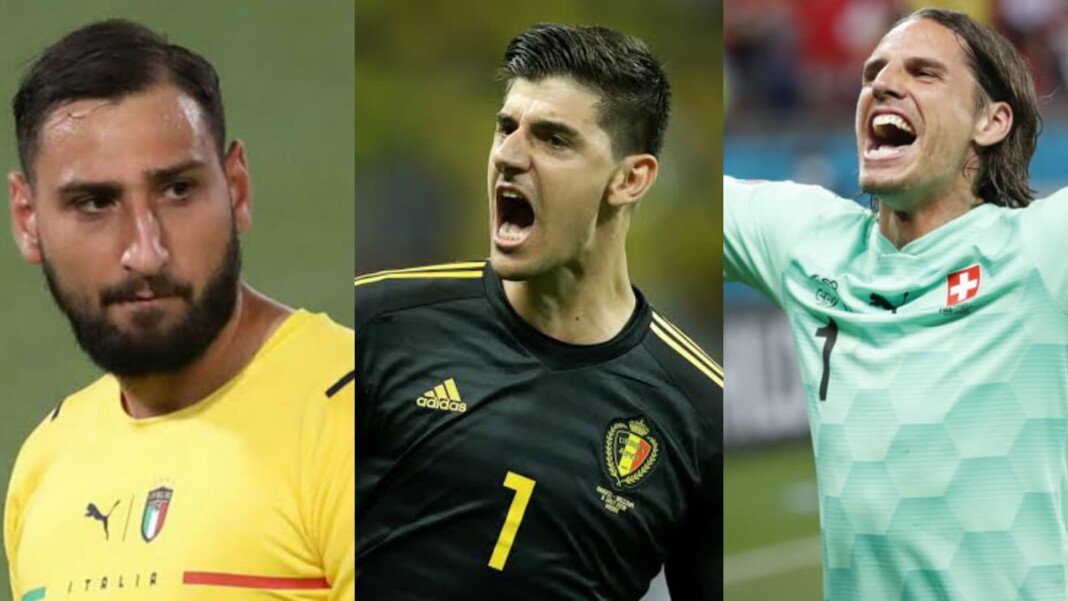 As we enter the final phase of the Euro 2020 tournament, there have been some heroic performances between the sticks by goalkeepers. An outstanding performance at the back could make the difference between a heavy loss and a nervy draw. We take a look at the best of shot-stoppers who have given their best efforts for their nations: here are the top 5 goalkeepers in the tournament so far.

In their five matches so far, England are yet to concede a single goal, keeping clean sheets in all of their fixtures so far. While the defence has put in a big shift to make this possible, England #1 Jordan Pickford has played every single one of England’s 450′ minutes in the campaign so far. With nine saves and 19 ball claims on his way to staking a claim for the Golden Glove, the Everton keeper has the England fans believing it’s coming home. The only goalkeeper yet to concede a goal this tournament, Jordan would like to keep this record intact until the end of the tournament if possible.

Possibly the most talked-about goalkeeper in the tournament so far, Sommer had one of the best goalkeeping displays in the tournament against Spain in the quarterfinals. Despite being knocked out by the Spaniards in the quarterfinals, Sommer made a string of saves in extra-time to keep ten-man Switzerland in the match until the end of extra-time. Over the tournament, the Borussia Monchengladbach custodian has the highest number of saves made with 21 with 14 ball claims too. The Swiss may have conceded nine goals and kept no clean sheets, but one of the biggest reasons for their quarterfinal run is Yann Sommer keeping out a lot more goals from going in. The highlight came in their shootout victory against France, with Sommer saving Kylian Mbappe’s decisive penalty.

Belgian keeper Thibaut Courtois recently made headlines for dribbling past Portugal’s Cristiano Ronaldo calmly and then sparking a move that ended in a goal for the Red Devils. Belgium have since been knocked out against Italy in the quarter-finals in a 1-2 loss against Italy, but the 29-year-old Los Blancos #1 has been near his best in the five matches that he played for Belgium. With 14 saves and 14 ball claims, just three goals conceded and three clean sheets kept in five matches, Belgium would once again rely on the 6’7 tall goalkeeper’s performances in the upcoming World Cup qualifiers and ultimately the 2022 Qatar World Cup too.

One of the less-noticed performers of the competition, Czech Republic’s Tomas Vaclik has quietly gone about his business, doing exactly what his country asks of him. After an average season with his club Sevilla, the 6’2 goalkeeper has made 14 saves and 11 claims in five matches, managing two clean sheets too. Vaclik has been one of the biggest reasons behind the Czech Republic’s surprise quarterfinal run, which included a 2-0 victory against European heavyweights the Netherlands. Despite being knocked out by Denmark in the quarters, Vaclik can take solace from his impressive performances under the bar.

The last keeper on this list is the widely known and much appreciated Kasper Schmeichel. The Leicester City goalkeeper is well known to those who follow the Premier League, and he made headlines early in this tournament for consoling teammate Christian Eriksen’s wife and daughters when the player collapsed on the field in a shocking incident. That aside, Schmeichel has also been immense for his country with 8 saves and 4 claims as Denmark won three games in a row to put themselves in the semifinals. Currently two games away from the second fairytale victory of his career, after winning the Premier League with relegation-threatened Leicester City in 2015/16, Schmeichel would have to be at his best against England, and then either of Spain or Italy, in order for the Danes to stand a chance.